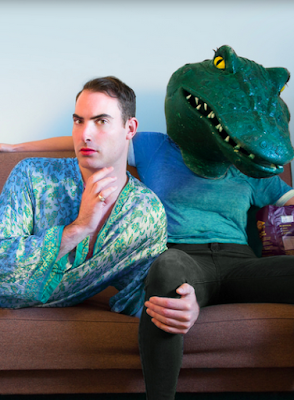 Polly is a 400kg salt-water crocodile who loves to feed on cats and other small animals, and at the local veterinary clinic she has an abundance of small creatures at her disposal. But this isn't Polly's story. It's Joe's, the owner of the clinic but his assistant Stephanie will have you thinking it's hers. But then, maybe it's Julia's, the woman with a strong dislike for rats? One thing is for certain, it isn't the narrator's story. And so begins Amelia Evan's surreal TRAPS: A Romantic Comedy for the Modern Sociopath.

The ensemble do exceptionally well with their characters and the material, where even though this is an absurdist play, they make it feel like this is the real deal. Marissa O'Reilly displays equal sensitivity and determination as the agitated veterinarian assistant Stephanie, and Charles Purcell is just as captivating as Julia, who becomes the unexpected owner of a chihuahua that won't stop arfing. Tom Dent as the narrator with no backstory or name is charismatic throughout with his futile attempts at becoming part of the story and Rachel Perks is simply marvellous as Joe, the vegetarian veterinarian psychopath who is in dire need of checking his male privilege.

Evans has written and directed a light-heartedly dark love story that raises a number of questions around oppression, domestic violence and feminism. While the plot is obviously far-fetched with fantastical characters, there is grounding in the work where Evans never loses sight of the issues she is bringing attention to. The gender-swapping roles of the actors playing Julie and Joe further add to this and it will be interesting to see how this changes - if at all - when Paul Blenheim steps into the role of Joe from Tuesday 26 September.

The adroit sound design by Tom Hogan and lighting design by Bart Mangan further adds to the dark tone of the show and together with Evans' direction, create distinct locations in the small space. There are a minimal number of props used in TRAPS and those that are used, such as the pink wig and a spoon, provide some entertaining moments while adding further depth to the characters.

TRAPS is a play in three amusing and fascinating acts where despite the humour and the comedy, brings to the surface issues like male privilege and violence against women in a way that doesn't force its opinion on you but has you begin to form your own questions about these issues and how they play a role in our lives. Clever writing and strong performances make this production a winning combination.