And so ends my favourite time of the year: the Melbourne International Fringe Festival. I'm constantly amazed by how many quality shows are put on during this time that challenge, entertain and surprise me. While I juggle full-time work and part-time study, I always make sure to block out my calendar for Fringe.
After seeing a mere 58 shows, my top ten shows are presented below. There are so many shows I wish I had been able to get to but the fates were against us and I promise to make it to your next one.
If the show was reviewed, you will find a link next to its name for more thoughts and opinions.
Enjoy!
Can't wait to see what 2018 brings!

1. Cactus and the Mime - review

A Cactus Mascot and a wannabe Mime decide to re-enact their relationship in the style of a children's show. What follows is a hysterical story of love and growing up that ends in heartbreak and looks at what happens when you are unable to move on when tragedy strikes.

Roby Favretto and Caitlin Spears as Trevor and Mandy have created a story that immediately draws you in, and one that finds just as much truth and honesty as it does with its humour and laughs. As the jokes become more vicious and personal, we begin to understand that there is something much darker lying underneath all this, something that Trevor and Mandy will ultimately end up facing head on.
There is also a blurring of performance and real life, which raises the question of how much performing do we do in our own lives and when are we authentic?
It's this blurring of themes and genres that Cactus and the Mime takes big gambles but it makes the work so much more impressive because of it.

Joel Bray's site specific show, Biladurang, is an intimate and beautiful look at identity through movement and story. Set inside the Sofitel hotel, this show for 12 people at a time has Bray exploring his homosexuality and his Indigenous heritage.
Bray exposes his vulnerability to us as he opens up on his attempts to connect with himself and with others. He finds the tender and comical in the smallest moments and his words create vivid images in your mind.
The hotel room in the Sofitel is used to its full capacity, from the outside red tower-light that shines through the window onto the wall, the views looking out into the Yarra and selected personal items that lay scattered throughout the room. The audio and visual elements throughout the performance are just as thought out and used exceptionally well, particularly the moments around Bray taking a bath.
The effects of Biladurang have stayed with me since I saw it, and I suspect many who saw it would feel the same thing. This is an exemplary example of the power of theatre.

Premiering at the New Zealand Fringe Festival earlier this year, The Basement Tapes follows a girl who tends to her recently deceased Grandmother's house and begins to clear out her basement. She discovered a tape recorder with a series of recording made by her grandmother that leads to her questioning what she has come to know to be true.
Stella Reid delivers a strong and focused performance as she gradually discovers that things are not what they appear to be. Aided by some great lighting and sound design, the intensity begins to build and the story really burrows its way into your mind and then begins to play tricks on you in a truly terrifying theatrical experience. There were moments where I genuinely thought I was seeing things that were not possible because of how this story sinks its teeth into you.
Hopefully this team make it back to Melbourne in the future, as I would love to see what they come up with next. 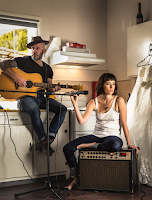 Writer Jeffrey Jay Fowler delivers a nuanced story on what love is and how this should - or could - be expressed. We follow a man and a woman (Mark Storen & Georgia King) who are in a seemingly perfect relationship until he proposes to her and she says no. Not because she doesn't love him, but because of her opinion on marriage and what it stands for.
What follows is a candid conversation about how we show our love for those closest to us, and how just because we have been conditioned to behave in one particular way doesn't mean that it should be blindly accepted.
The One's incorporation of blues music throughout, allows the audience to further delve into the minds of these two people and reflect and consider the arguments that are being made.
King and Storen's chemistry is palpable and with Fowler's stirring script, explores both sides of marriage with honesty and emotional rawness.

5. When Our Molecules Meet Let's Hope They Remember What To Do - review

The whimsical storytelling world of Stuart Bowden is beautifully brought to life with his new show When Our Molecules Meet Again* Let’s Hope They Remember What to Do *Probably in Space.
Bowden introduces us to / is Nat, an alien who travels to Earth and begins to describe his observations of this human species and the particularly odd behaviours that they have developed. Bowden also incorporates music and singing in this lo-fi comedy, which while highlighting Nat's playfulness also explores his melancholy and loneliness.
The message of not sweating the big stuff and not being overwhelmed by life is one that's often expressed, but in this show it is done with such earnest that it is impossible to not lose yourself in Bowden's highly descriptive and surreal storytelling about dancing like no one is watching and simply trying to be happy.

What's not to love in this absurd romantic comedy about a psychopathic vegetarian veterinarian? Amelia Evans' TRAPS is a light-heartedly dark love story that raises a number of questions around oppression, domestic violence and feminism.
The cast of four do a fantastic job in their roles, particularly Rachel Perks and Charles Purcell in their gender-swapping roles of Joe who is in major need of checking his male privilege and Julia who must contend with arfing dogs and disgusting rats.
Further highlighting Evan's intention with this piece, she has this three act story narrated by an unnamed male (Tom Dent) who tries his hardest to figure out whose story this actually is and his futile attempts at controlling the outcomes.
The use of the space and changes in scenes are cleverly orchestrated through some well thought out sound and lighting designs.
TRAPS is a perfect example of performance, writing, direction and design coming together to create highly entertaining and intelligent theatre.

Bonkers. This is the best way to describe the latest show from The Very Good Looking Initiative. Let's Get Practical! Live uses an entertainment chat show format to explore failure and anxiety through some highly absurd comedy.
The committed performances by Elliott Gee, Patrick Durnan Silva and Honor Wolff create some hilarious moments and they know exactly how long to run with something for maximum effect. I don't think I have ever laughed quite so much at an empty stage before.
The impressive sound and lighting design by Tom Backhaus has you feeling that you are trapped inside a David Lynch nightmare where the performers have taken too much acid.
TVGI are quickly cementing their place in the arts scene of Melbourne with their unique style of humour and expression of ideas. I can't think of any other company or individual in Melbourne that is doing this style of comedy theatre as well as this.


8. If There's Not Dancing At The Revolution, I'm Not Coming

I wasn't quite sure what to expect with this show, and while it didn't initially appear on my radar, an empty slot meant that I ended up seeing this without having any real idea what it was and I'm so glad I did get to it.
Created and performed by Julia Croft, If There's Not Dancing... explores the representation and use of women's bodies through film, dance and music. The costuming is incredibly impressive with Croft wearing her entire show's costumes (and props) in a layered fashion with each item being removed as we progress through the show until there's nothing left to hide. The final moments of the show make a powerful statement of women in pop culture and the world.
Croft delivers an energised performance that serves as a reminder to the constant scrutiny and sexualisation that women receive from a patriarchal society that continues to objectify and demean them.

This was another show that I stumbled across and had no regrets with seeing. Circus, comedy and cabaret come together for a smutty night of debauchery with Can't Face, a show name I never get sick of saying with a smile on my face.
From the second they appeared on stage, Jamie Bretman, Malia Walsh, Carol Cates and Vincent van Berkel had the entire room under their charm - except for the one audience member who refused to accept Bretman's balloon.
Their riotous acts were entertaining, impressive and incredibly funny, particularly Walsh and her attempts to control her period and van Berkel's revealing balancing act.
Through its cheeky acts, Can't Face manages to entertain but also intelligently critique and highlight various contentious issues in society that have yet to be addressed.
You would have had to be an absolutely can't face to have seen this show and not fallen in love with it.

In this brand new musical theatre show, SELF explores what happens when the man who seemingly has everything on the outside is falling apart on the inside. Director and choreographer Michael Ralph perfectly captures the sensitivity and naivety as well as the charisma and arrogance of the 'man' as he battles to make sense of who he is.
Performed by Rohan Browne, he delivers a highly expressive performance and seeing his body and demeanour transform as he falls deeper and deeper into this dark hole is engrossing.
The original jazz inspired music arrangement by Jack Earle builds on the environment and sets the mood and tone for what is transpiring on stage. Tom Willis’ lighting design works well in casting shadows and amplifying the tension being performed through the choreography.
The role emotions, conflict, aspiration and mortality play in the choices we make are all expressed in this stunning, original Australian production in a knockout performance by Browne.


And if you feel like a trip down memory lane, here are my top ten shows from the 2016 Melbourne Fringe Festival.
Posted by Myron My at 11:10