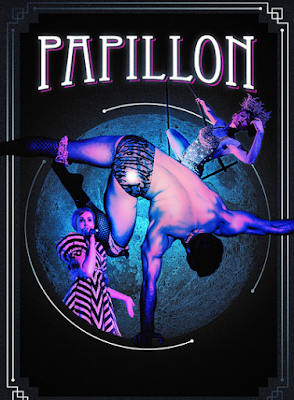 Circus, cabaret, comedy and a dash of debauchery collide in Papillon. After touring nationally for almost four years, the show has returned to Melbourne for this year's Melbourne Fringe Festival and it definitely lives up to expectations.

Mark Graham's cheeky balancing act displays his strength, amazing sense of balance and the gymnastic skills required to pull this off - as well as his clothing. Later he performs a mesmerising aerial hoop act to a stunning cover of Radiohead's "Creep" sung by Minnie Andrews.

Joshua Phillips' two balancing acts - one on a ladder and then on a number of chairs - add to the suspense one feels when watching circus but his comical demeanour make it seem like he is in control the entire time.

Led my Musical Director, Matt Anderson, the music plays a vital role in this show, setting the mood for each act and evoking varying emotions from the audience. Amy Nightingale-Olsen's rubber ducky trapeze number is suitable paired to a Bert and Ernie themed electronic song, and her partnered juggling act with Anderson, involving some strong hand-eye coordination as well as being in total time with each other, is accompanied by some great swing style music. Similarly, Andrews' performance of Khia's "My Neck, My Back" is a perfect way to begin to bring the show to a close.

The show may have run for only 45 minutes of the 60 minutes that it's advertised as, but through some beautiful re-imagining of songs, aesthetically captivating acts and flirtatious humour, Papillon is a great example of how fun and entertaining circus can be.