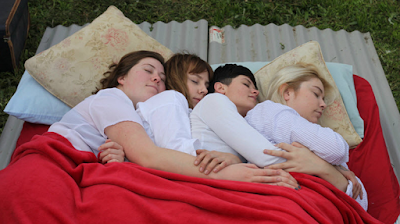 For those who enjoy the thrill of watching Wheel of Fortune, Family Feud and The Price is Right, you will definitely not want to miss Apologue. Then again, maybe you will, as the game show within the show is not exactly a contestant friendly game show. It is however, a quirky and fun look at how the mass media is used to manipulate and control our thoughts and beliefs.

A hapless contestant is pulled on stage and must answer a series of questions in order to win some inane prizes that are presented as essential and luxurious by the hosts. With each round, the contestant’s comments are taken out of context and opinions and beliefs are pushed down upon her.

The four cast members are great to watch on stage, each bringing the required energy for their character and in turn, supporting the others. Elizabeth Wilhelm and Elly Hewitt as game show hosts Vanessa Rochella and Bradley Marino (with a moustache that seems to have a life of its own) are brilliantly excessive or exaggerated with their fake smiles and underlying emotional and personal problems seeping through the facade.

Milla rolls out the game show's crew as the focused and no nonsense stage manager Whimsy DeBarcie, whose only concern is making sure that the show rates well. Lucy Rees as contestant Jennifer (or Jen, Jenny and Jumanji) portrays the confusion and frustration of being taken out of context and being coerced into saying and doing things she disagrees with as she is pounced on by the hosts. I feel Apologue could have gone further and been more direct in its examination of mass manipulation as at times I felt that these ideas were passed over and lost in translation due to the game-iness of the environment.

Apologue is a bold theatre piece by Spoon Eyes Productions that despite this critique, still has you questioning what it is you value and why you value it. With the strong dose of dark humour and over-the-top performances, it is a fitting show to be performed during the Melbourne Fringe Festival.

* Original review appeared on Theatre Press on 25 September.
Posted by Myron My at 01:02