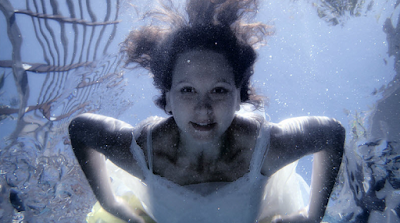 We’ve all been invited to a party - an ocean party for our half-human half-octopus friend. Created and performed by Giema Contini, Awesome Ocean Party is a 60-minute cabaret-comedy-performance piece that explores loneliness and acceptance through the eyes (and three hearts) of this hybrid creature.

Contini has great physicality on stage and fully conveys the awkwardness of her character that later reveals to us that it is her birthday and the human side to her begins to surface. Her interactions with the audience are sweet and genuine and convey her longing to belong and be accepted.

While the original performance of the show was staged in an empty swimming pool, for this remount, Contini has chosen to perform in the Butterfly Club. With its own quirky feel and some specific set pieces, you easily believe that you are in some underwater/beach environment. The fish tank in the centre of the stage is a constant reminder of where she has come from and the seashell sandpit is utilised well as a place for her to feel safe and happy.

The highlight of Awesome Ocean Party is the biographical picture-story book Contini reads to the audience, from her birth to the death of her parents and then finding hope and strength. It's a touching story and the illustrations in the book and the descriptive passages create some stunning visuals for us. The music composed by Nathan Stoneham and played by Ned Dixon support the story - and the performance as a whole - in creating a feeling of belonging and being connected.

Contini has a great voice and the timing and pacing of her songs is well structured to keep the momentum (and a bit of awkwardness) going. Songs like "Under The Sea" from The Little Mermaid and Andrew Gold's "Thank You For Being A Friend" (which most people would recognise as The Golden Girls theme), express her sea dwelling and land dwelling aspirations and desires while also exploring the differences of her life.

There is a whimsical aspect to Awesome Ocean Party that makes you warm to Contini and the show almost immediately. It is uplifting and entertaining while encouraging you to remain true to yourself and your convictions and believing that everything will turn out the way it should.

Click here to read my interview with Giema Contini.

Awesome Ocean Party was performed as part of the Melbourne Fringe Festival from 20 – 25 September.