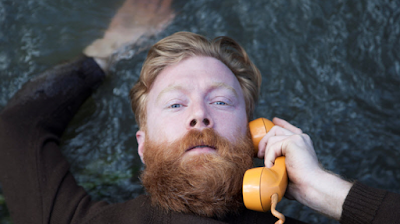 Melbourne Fringe Festival is always an opportunity for not only artists to try new things, but also audiences, and this year, Blind Spot is definitely going to be one of those shows that is bound to have people talking long after it's over. This latest work by performance-maker Daniel Santangeli is a story told in reverse and is performed to an audience of only two people at a time.

"In Blind Spot, you experience a crime story in reverse order. It starts with the main character's release from prison and finishes 11 years earlier on the night before the crime. The audience are literally on their feet the whole time, being led through each episode and it's not until the end that they can piece it all together," Santangeli tells me. "Blind Spot is being made with sound designer Rosalind Hall so a lot of the work is experienced aurally: through payphones, hidden speakers and helmets with sound devices in them made specifically for the show."


"The show draws heavily on the Faraday Primary School kidnapping and it was two men who were found guilty of the crime - so this idea that as an audience member you are going through this experience with a "partner in crime" is reflected in the story itself," he says. "Blind Spot was originally going to be a show for one person at a time! But we realised early on in the process that if you go to the show with a friend you can see what you are experiencing reflected in them, which makes it richer for you: a bit like going on a roller-coaster with a friend rather than by yourself!"

Ironically, and like most people, Santangeli has an intense fear of interactive theatre so while he can relate to their trepidation, he also ensures that they are comfortable and relaxed during the performance. "We spend a lot of time in rehearsals going through all the possibilities of how an audience member might respond to different scenes and focus heavily on creating as safe an environment as possible. I mean, there should always be a bit of a thrill in this kind of work but it should always be safe."

With the ever increasing number of immersive and interactive theatre performances being produced, it seems the days of audiences being a passive observer are numbered. Audiences are wanting more from their experiences in the arts and arts creators are happy to oblige. "Interactive theatre gives audiences the opportunity to understand something through their whole body - not just emotionally and intellectually but with a sense of what it is to have a lived experience of a particular event. I think this is where the power of immersive theatre lies," he explains.

Being a creator of immersive experiences, I'm curious to hear what his most memorable experience as an audience member has been. "Ah! Choosing only one is difficult! I'd have to say Melbourne theatre-maker Brienna Macnish's Home, which she presented at the 2014 Next Wave Festival," Santangeli says. "Based off a series of interviews she conducted with an elderly woman who was facing the prospect of moving into a nursing home - the audience listened to the interviews as they moved through the woman's home. I was in tears by the end of it and the experience prompted me to have conversations with my mum about nursing homes and care."

Similarly, Santagneli hopes his work will inspire people to think about and discuss issues in a way they have not thought of before ."All of the work I create has social justice at its core and I want audiences to come away from the work I create more empathetic about a particular issue. Blind Spot is about our criminal justice system and Australia's addiction to locking people away in prisons - I hope audiences leave thinking about what leads people to crime and how, as a society, we choose to punish."

If you had to name your child after a vegetable what would it be?
Broccoli, because Broc Santangeli has a nice ring to it.

Which reality TV show would you most like to appear/compete on?
If You Are The One, because I deserve to be on it considering how many hours of my life I've spent watching it.

The most irritating habit I have is flossing in bed, according to my partner.

What's a song that sums up your life?
Well, right now: 'Under Pressure' by Queen and David Bowie...because I've got to get this new show up on it's feet in two weeks!

During Fringe, I really, really, really want to duplicate myself - I have to be at Blind Spot each night for the entire two-and-a-half weeks of Fringe so I need a clone to attend all the other amazing shows during the festival.