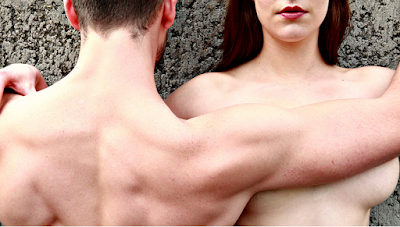 Presented as part of the Melbourne Fringe Festival, The Human Project's 2.0 | Contact, is an exploration on what touch can be and mean to humans and how life could be without it. A highly physical experimental piece, it incorporates martial arts, dancing and some wrestling moments as an "outsider" dissects and analyses the state of physical touching.

With injury befalling one of the performers, the show has had to be restructured to work around the three remaining cast (Rosie Osmond, Ashton Sly and Joseph Lai) and you wouldn't be able to tell as the performance is seamless and feels like it has been just the three of them rehearsing all this time. This is a highly demanding show - both physically and mentally - but the training and effort the three have put in in getting this piece together is evident. With its minimalist set, staging and costumes there is nothing for the performers to hide behind and their every move and word is what has all of our attention.

Throughout the show, there are "outsider" descriptions of various forms of human contact that the incomers have witnessed, which are then played out for us on the stage. While these appear exaggerated and feel unnatural to watch, we are later informed that what we have witnessed is a common act such as kissing or shaking hands, adroitly illustrating the idea that a simple act of contact can generate multiple interpretations.

An interesting theme that runs throughout 2.0 | Contact regarding touch and physicality is that love and violence - affection and aggression - are so closely related and can transform from one into the other quite suddenly. There are scenes of gentle caresses or kissing that are contrasted with the aggressive punching choreography, bodies running into each other and being flipped onto gym mats.

2.0 | Contact is a strong production by The Human Project, a young promising company only formed in 2015. This is very much a reflective and evocative piece that has you questioning how we use touch in our own lives and how these meanings can differ from each person - and being - we come into contact with.

Myron My
Reviewer/Writer based in Melbourne. Keen interest in theatre, cabaret, circus, dance and any other form of performing arts. Also a fashion, film, TV and art enthusiast.