Not Dead Yet review 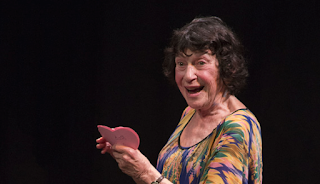 Lynn-Ruth Miller has lived a long time. She may have even almost died a few times, but in her cabaret show Not Dead Yet, she lets it be known that even at 81, she's no where near dead yet, not by a longshot. With a mixture of story telling, music and songs, Miller takes us on a journey on what it means to not only live, but to be alive.

Beginning as a toddler, where even the temptation of tapioca pudding was not enough for her to drink her milk, which she still hates, Miller manages to fill us in on eight decades worth of stories in just 60 minutes. It's a carefully crafted show where plenty of thought has been put in to how these stories will be told. Miller's tenuous relationship with her mother is summed up with a few powerful words, the beginning (and end) of relationships is covered in just a minute but yet we feel like we know every detail of these events.

There is much nostalgia in Miller's show with bittersweet memories of past loves and family members. At one point, Miller is almost overcome with emotion and whether or not this was part of the act is hard to say. As Miller is talking about these moments, it feels like we are no longer in the room and she is literally reliving these broken heart moments, the swimming lessons, her 16th birthday and so on. They say you can tell a lot about a person by their eyes, and Miller's shine when talking about all these events and in return, we are captivated by everything she has to say because she is talking from the heart.


While the show is low on musical numbers, they are still engaging pieces, which provide more insight into Miller's varied life. Her voice is not as strong as what it undoubtedly could have been years earlier but she can still carry a tune, and hell, she's still a better singer than most of us anyway.

As Miller states in Not Dead Yet, this show is not a sob story but about a series of events that for better or worse, have got her to where she is now. Her life is going to keep getting better and more enjoyable every day until she dies but there is still a lot of life left in her and that's a valuable lesson we can all take home.