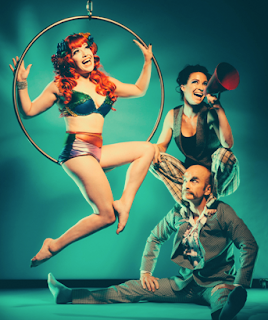 Circus Oz returns to Melbourne with But Wait...There's More, fusing circus acts with consumerism and "infobesity"; the idea that everything is being commodified and the world is moving at faster speeds than before.

The opening act of Lilikoi Kaos and her hoops was amazing. With hoop acts becoming a dime-a-dozen in recent circus productions, Kaos brought so much energy and fun to the routine it was impossible not to get swept up by the momentum. The program definitely does not lie when it compares her as a "mixture of Jessica Rabbit, Lucille Ball and Tank Girl". Kaos has a unique talent that is great to watch on stage.

Similarly the enchanting balletic unicycle act by Kyle Raftery and April Dawson was mesmerising and the accompanying music created an almost whimsical environment. In fact, all the music, led by Ben Hendry and Ania Reynolds, was the one superbly consistent factor throughout the show. Each act's musical soundtrack was perfectly suited to build the mood and the suspense and change the tone as needed.

Towards the end of last year, I saw Circus Oz's Close to the Bone. Perhaps it was the more intimate setting of the Melba Spiegeltent that allowed the acts to draw you in but under the Big Top tent, many of the acts felt lacklustre and uninspiring. There were minimal wow moments and even though circus can be more than just "wow", when you're performing in this type of environment, on this type of stage, there needs to be plenty of dramatic climax and intensity.

This was more noticed in the second half of the shown which lacked the variety and the suspense needed to maintain my interest. The performers, such as the consistently amazing Sharon Gruenert, are clearly talented and accomplished in their fields, but as an audience member, there are only so many flips and jumps that a show can have before it stops becoming interesting.

As a theme, the exploration of consumerism and information overloading didn't work within the confines of circus and despite Candy Bower's great voice, the singing numbers were out of place and broke the momentum of the acts. However, the set-ups for the bigger acts were great to watch as the whole ensemble playfully worked together to prepare the stage.

There is no denying that there are a number of highly skilled performers within the company and Circus Oz knows how to put on a good show, I've seen them do it before, numerous times. Unfortunately, But Wait...There's More is not one of their better showings. For all the glitz and sparkle, I didn't find much substance within the acts which I guess is what you could argue society is trending with our obsessions on "infobesity" and consumerism.

* Original review appeared on Theatre Press on 21 June
Posted by Myron My at 09:51