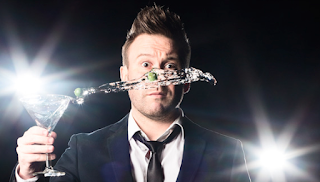 Every now and again, there is a show that is so clever, so witty, so painful, so funny, so daring and so much more than you thought you were getting in to. Dash Kruck's cabaret show, I Might Take My Shirt Off, is a prime example of this.

Kruck plays Lionel, a man who is struggling to accept that the love of his life has left him. To be perfectly honest, he's a heartbroken mess, and with the stern advice of his frightening German therapist who orders him to go out and express himself, Lionel ends up performing in his very own cabaret performance.

With his "how to cabaret" list in his trouser pocket, Lionel systematically goes through his checklist that will guarantee him a successful show. Included on this list is taking his shirt off, booze and being sexy. For the latter, he performs a hilariously brilliant and most memorable song about being - for want of a better word - "intimate" with a partner.


Kruck portrays the nervous and emotionally battered Lionel with honesty and his retelling of happier times with his ex are difficult to listen to. Accompanied by a three piece band on keys, drums and double bass, the original songs written by Kruck and Chris Perren, are well paired in guiding Lionel to overcome his loneliness and sadness of a broken heart.

Lionel may be passable on stage but Kruck is an amazing talent on stage. His comedic timing and the tightness of the show's delivery is a standout. Kruck engages with the audience on many levels as he heads into the crowd to ad-lib songs or just to say hi, so even when things get quite sexual and explicit, the relationship he has built with us lets him get away with it. Of course, his charisma and cheekiness don't hurt either.

Kruck has a strong voice that adapts to the different tones and styles of song covered throughout the show. If only there had been an encore to the "unplanned" encore because I would have happily sat and listened to Kruck's voice for much longer than 60 minutes.

I Might Take My Shirt Off is a highly recommended cabaret about freeing oneself from the past and looking hopefully to the future. And also about killing mythical beasts. But more to do with the former.