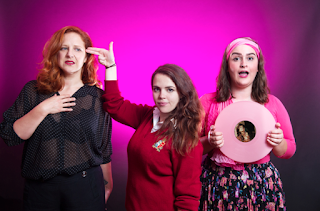 Home Invasion is a play that looks at obsession and disconnection. It's about people dealing with destructive behaviours in their lives; a housewife who is haunted by JonBenét Ramsey, a schoolgirl with violent tendencies and a mechanic who feels guilty for the death of a young woman.

The cast of six - Kristina Benton, Nathan Burmeister, Trelawney Edgar, Ashleigh Goodison, Wayne Tunks and Grace Travaglia - worked well in exploring their characters and allowing them to go down the dark path. There were some well-crafted moments among them, with strong scenes between Benton and Goodison and Edgar and Burmeister.


Unfortunately, the direction by Christopher Bryant was sorely disappointing. There was too much sitting or standing and not enough doing in this 90-minute show. The long scenes had no differentiation between them and the acting seemed stifled because of this. Bryant however is a capable writer and it was interesting to see how the separate threads from each story slowly began to weave in together, but the musical interludes with the cast singing could have been cut.

The stage set up was also lacking in Home Invasion. With no "backstage" area, when the actors were not in the scene that was being played out, they sat on stools directly behind the actors. The proximity of how close they were proved to be very distracting with every drink they took from their water bottle, every itch that was scratched or any readjustment that was made being done in plain sight of the audience.

The extremely minimal set design did not help with either, and seemed to actually be hindering the show from building the environment these people lived in. Apart from the wall painted pink, there was nothing visually stimulating about the show. The venue may be small but I’ve seen many productions performed in this theatre where some simple set pieces and discreet visual touches helped immensely to bring their worlds to life for the audience.

Whilst the writing and the acting in Home Invasion are admirable, I ultimately felt the remaining elements of the show still need to be further developed to allow the audience to build a stronger connection with the characters and the chilling world they are creating for us.

* Original review appeared on Theatre Press on 1 June
Posted by Myron My at 19:36