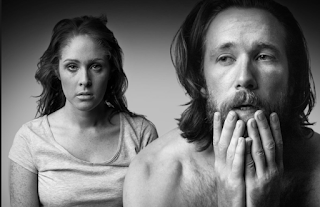 The tale of two lovers in a tumultuous relationship has been told time and time again that it can be difficult to tell a story like that that will draw your audience in and leave them wanting more. It can also be daunting to do well when using Sam Shepard's well-known play, Fool For Love. However, in Red Theatricals' production of Fool For Love, they manage to do all that and a whole lot more.

Presented by Q44 Theatre Company, it's an exhilarating ride watching this dark tale unfold and this is mostly to do with the performances of its two leads, Mark Davis and Rebecca Fortuna, who are quite frankly, phenomenal. They have truly captured their characters and the chemistry is electric in their scenes together.


Davis' transformation into Eddie the cowboy stunt man is one of the best male performances I have seen so far this year. The assured way he walks, the charming and sexy way he looks, to the masculine way he slings a lasso and cleans his gun, Davis make this character highly complex and intriguing. Through the course of the play's evening, we come to understand that Eddie is always going to get what he wants no matter what, even when he's not sure what that is; he is simultaneously our hero and our antagonist.

Similarly, Fortuna's depiction of the strong yet fragile May is genuine and honest. Purely from the look in her eyes, you can sense she is stuck in a situation she does not know how to get out of and it will eventually end up killing her, either metaphorically or literally. Fortuna allows her whole body and mind to be painfully taken over by May as events culminate to this tragic evening.

They are supported by Sam Allen as ghost-like presence Old Man, who sits side of stage in his rocking chair, drinking his alcohol. Even though he's not in the action, we can sense his presence and the hold he has over these two lovers. William Prescott rounds out the cast as Martin, the man that May feels like she needs to be with but maybe not who she wants to be with. Prescott plays Martin well as the polar opposite of Eddie, and you could even go so far as to say he is the Edgar to Eddie's Heathcliff.

While I question one or two directing decisions, Gabriella Rose-Carter effectively creates much action on stage while keeping it in the claustrophobic confines of a small, seedy hotel room. Rose-Carter has managed to bring out raw and passionate performances from all the actors in this production, which is rare to see these days.

32 years after it was written, Sam Shepard's Fool For Love still packs a punch with its themes of love, family and patriarchal society are still relevant today. Red Theatricals not only do justice to the play but also manage to put its own unique touches to it. This powerful production is already a firm highlight of 2015 and should not be missed.