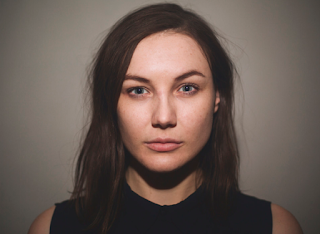 There's a strong sense of unease as I take my seat for Little Daughters. Having to walk through the seven motionless actors on the stage to get to my seat is quite eerie and almost intimidating. They are all dressed in black and with the stage bare and cloaked in black too, there is a dark mood that covers the room. The six men on stage stare intently at the sole woman, their eyes could pierce through her skin if they were daggers.

It is never explicitly stated what happens to this woman (Annie Lumsden) but we get enough information to know that she is the victim of a sexual assault. The six men portray a doctor, boyfriend, friends and possible assailant. The one thing they all have in common though is their demand at controlling and handling the situation. While the men discuss Lumsden's assault among them, they consistently talk at her when addressing the issue. The idea that she perhaps needs to forget about it and move on is thrown around and there is an echoing of doubt and frustration coming from them all, in particular the over-the-top portrayal of her doctor (Martin Can De Wouw), who is comically frightening in his assessment and treatment of Lumsden.


Director Zachary Ruane delivers some great moments in his direction of Little Daughters. In particular, having the men not only exit the stage at one point, but exit the room all together. Initially it's down to Lumsden and Raymond Martini on stage. Again, while nothing is confirmed, you get the strong impression that this is her assailant. It's an ambiguously confronting moment that Ruane handles with great skill.

Ultimately it is once Martini leaves the room, that Lumsden can finally open up and speak freely about her experience and emotions. Sadly though, she can only feel like being honest when she is alone, when she is no longer being talked at or patronised or threatened by the men in her life. It's a strange monologue but it shows the thought process and ideas that formulate in the mind of a victim of sexual violence.

The reason it all feels so real and exposed is because playwright Annie Ferguson has based Little Daughters - her first full-length play - on her own personal experience with sexual violence. It's an extremely brave piece that has been in formation for a number of years that creates the right amount of tension and exposition that slowly envelops us. Even though Lumsden's story is based on Ferguson's experience, it could be anyone's story, and we are all inside that story and we all need to start listening to victims of sexual violence to bring that story to an end.

* Original review appeared on Theatre Press on 16 June
Posted by Myron My at 19:36