Nothing To Lose review 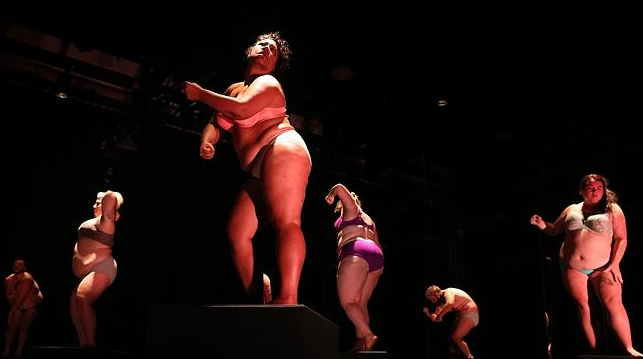 When you go to see a dance show, you expect to see people who are nimble, thin and fit. You don't expect to see fat dancers on stage. However, Force Majeure have done exactly that with their show,  Nothing To Lose, which explores the physical form of larger bodied people.

The show begins with the seven performers - Claire 'Scarlett' Burrows, Julian Crotti, Michael Cutrupi, Lala Gabor, Ally Garrett, Latai Taumoepeau, Anastasia Zaravinos - asleep on stage, like animals in the wild. As the slowly awaken from slumber and realise they are being watched (by us) they begin to challenge us, staring us down as they walk around the stage saying "fuck you" if you don't like this.


The "challenge" is taken even further when a number of volunteers are taken on stage and given the opportunity to explore the dancers' bodies, as if they were on display at an exhibition with a "curator" guides us in where to touch and what to do. As one of those volunteers, I can say it was quite a surreal moment pushing up someone's stomach flesh and grabbing her inner thigh and pulling it forward to see how long it wobbled for. Even though the experience only lasted a few minutes, it felt like much more time had passed up there.

Nothing to Lose may celebrate these bodies but at the same time, it deals with the fat-shaming and the self-loathing that occurs in their daily life. At one point, a pre-recording announces various fat slurs and insults ranging from downright offensive to the ignorant remarks we can make. There are moments of shock and disgust with some of the things that are said, including one statement of "who would want to rape you?"

Whilst the show packs a punch, it is much more movement and performance based rather than dance focused. There are however, some brilliant dance sequences including one by Burrows and Garrett. Both have a strong preserve on stage and took all my focus. Their side-by-side routine with Garrett and the dress and Burrows and the rope would be a highlight of the show, combining sensuality, sexuality and vulnerability.

Nothing To Lose is about challenging us and forcing us to question preconceptions about not only what a dancer's body should look like and do, but also what our own bodies can and can't do. Our bodies should not be limited in what they can accomplish and in this provocative and innovative work, Force Majeure show us exactly that.