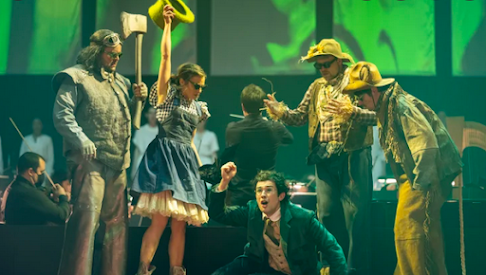 It's been over 120 years since the release of L. Frank Braum's The Wonderful Wizard of Oz, in which a young girl called Dorothy Gale is swept away by a tornado and carried to the Land of Oz. While many would have read the 1900 story and many more would have seen the 1939 film, it is the first time that Italian composer Pierangelo Valtinoni’s opera, Il Mago di Oz, is being performed in Australia. Presented by the Victorian Opera, the opera mostly sticks to the source material but manages to throw in a few contemporary references to  surprise audiences.

Soprano Georgia Wilkinson as Dorothy possesses great presence and charisma as the determined and brave Dorothy and an even more captivating voice that takes us on a vocal journey that matches the magic of the physical one that Dorothy takes us on. James Emerson, Stephen Marsh and Michael Dimovksi deliver distinct characterisations to The Cowardly Lion, The Tin Man and The Scarecrow, with their voices supporting each other but able to take the lead when required.

With conductor Chad Kelly leading the orchestra in the middle of the stage, there is plenty of creativity in setting the scenes and depicting the story through Constantine Costi's direction. Dressed in various white outfits, the Victorian Opera's Emerging Artists and Children’s Chorus take on the roles of the munchkins, mice and residents of the Emerald City and at times, their bodies are used to project objects and locations on. They appear all around the orchestra, using as much space as possible as the orchestra beautifully brings the enchantment and vividness of Oz to life.

Daniel Gosling's lighting and projection design includes visuals projected onto a scrim that shape the locations (green buildings for the Emerald City) or the tone (distorted/screaming faces during encounters with the Wicked Witch of the West). Mel Serjeant's costumes are simultaneously a homage to the original tale and have a flair for individuality, giving the outfits a touch of modernity.

While a few narrative choices towards the end of the show seem overly sentimental, Il Mago di Oz is a perfect nostalgic evening to get swept away by the music and performances. A short season of only two nights, here's hoping there will be another opportunity for this opera to be experienced in Australia.