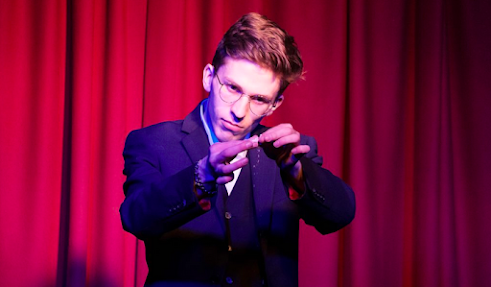 Lachlan Wilde has been practising magic for roughly a decade and even won the Australian Junior Champion of Magic award at the 2015 Melbourne Magic Festival. Three years ago, as a bright eyed 21 year old, Wilde bought a ticket to see the world and create new experiences for himself. Fast forward to 2022, and Wilde is back at the Magic Festival with his show World of Wonders, in which he shares those adventures with us through some mesmerising magic.

There is great imagination and creativity with Wilde linking his "art of deception" with anecdotes and memories from his travels to Abu Dhabi, London and Paris, including a particularly interesting (although somewhat questionable) spotlight on Jack the Ripper. His storytelling is specific enough to form bonds with us but vague enough where we are able to insert our own experiences and further strengthen the relationship between magician and audience.

The acts used to either support or bounce off his stories are well selected and display Wilde's breadth of showmanship and skill in the world of magic, including his sleight of hand. With many instances of audience participation in the show, you are left you even more baffled as to how these feats could be executed, but ultimately it's better not knowing regardless how much we might want to have the answers.

Wilde is also very personable and despite the large venue space, he manages to perform to the entire room as much as possible. There are times however when the space is a detriment to the effectiveness of the magic and the connection with the audience. As a number of tricks involved cards, rings and a few other surprises, that would be difficult for the back of the room to see, Wilde utilises a camera to project this to a large screen. In doing so though, he loses his charismatic presence with us as the focus switches to getting the act right for the camera.

Whether you're traveling or watching a magician, World of Wonders is a humorous and fascinating reminder that there is a lot of magic in the world, provided you open yourself up to these moments and opportunities. The season might have ended, but head to Lachlan Wilde's website for updates on tours - you never know where he might pop up.

World of Wonders was performed 8-9 July at The Houdini Theatre as part of the Melbourne Magic Festival.