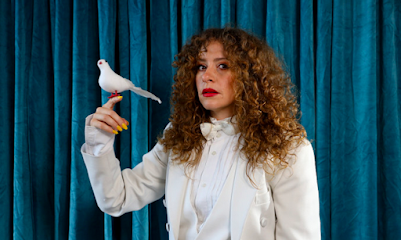 The audience waits excitedly for the magician to appear. You can feel the anticipation in the room as we face the stage, where a large chest sits. Where could our magician be? And then magically she is here! But this is not the magician, but the magician's assistant, and so begins Maria Angelico's Melbourne International Comedy Festival show The Disappearing Act. Neither Angelico nor her tech assistant knows where the magician is, and frantic calls are made to his various girlfriends to locate him. But as the saying goes, the show must go on and Angelico takes the to the stage!

Naturally there are laughs to be had as this is being presented as part of the Comedy Festival, but the show's inspiration comes from the true story of Angelico's father, a well-known magician, who was absent for much of her life and instilled a household with domestic violence and abuse. You notice these anxieties and vulnerabilities manifesting throughout her performance; that there is something else simmering in her attempt to put on this magic show.

These experiences end up defining The Disappearing Act but unfortunately they are not delved into deeply enough or long enough to give them weight. Angelico recalls the instances of domestic violence, abuse and sexism she was a witness and victim to, but these references are few and far between that they don't drive the show and its climax doesn't feel complete. Further reflection is necessary for Angelico to find the balance between something as serious as violence against women and children and identifying the humour within that.

While there's a release for Angelico at the end of the show, based on what we see, this doesn't come across genuine or organic. There is not sufficient exploration as to what she has endured, how it has impacted her and how she has come to allow for healing to begin. There's a very intelligent and thoughtful message to be made with The Disappearing Act and hopefully Angelico is able to pull that rabbit out of the hat in the future and really hone in on that.