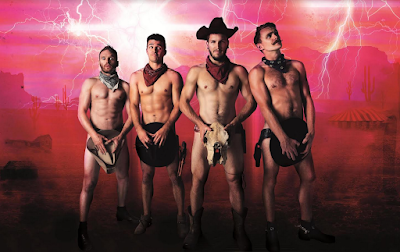 They brought us zombies earlier this year, and now circus troupe Head First Acrobats is bringing us a new cowboy inspired show that is bound to keep our eyes glued to the stage. Presented as part of the Melbourne Fringe Festival, Railed, we follow four train robbing cowboys who hole themselves up in a bar to avoid the authorities, and it's this narrative driven circus that makes this company one of the more exciting ones to experience.

After the success of Elixir at the Melbourne International Comedy Festival, Head First Acrobats director, Thomas Gorham is eagerly anticipating the opportunity to get his cowboy boots on with Railed. "We wanted to create a fresher, bigger show that had our trademark style. We were looking for a theme with a lot of flexibility in the characters, something that was very well entrenched in popular culture," he explains. "In the end we decided on a western and it’s been incredibly popular with audiences. The success of the show relies not just on the skill of the performers, but on their charm and ability to engage with the audience. Railed is hilarious, spontaneous and at the same time highly polished and surprising."

Featuring ensemble members AJ Saltalamacchia, Callan Harris, Adam O’Connor-McMahon and Harley Timmermans, Gorham and team have worked tirelessly to ensure the theme and the acts come together organically. "It's a brilliant fusion," he says. "Railed has a wonderful western aesthetic for all the costumes and equipment. The juggling is done by sliding whisky bottles, acrobatics on an old saloon bar and circus acts involving classic tropes likes whips and guns. While all the acts are great, the show is definitely stolen by the amazing unicorn and horse straps act/sex scene."

Railed has garnered much critical acclaim since its premiere, including winning Best Circus and Physical Theatre Award at Adelaide Fringe, and from its inception right through to refinements and changes to its upcoming season, a collaborative approach has always been undertaken. "Initially we paint out the show in broad strokes first; look at what it could be, who it's for, what venues we could play it in. From there it is very organic and easy within the group. We collaboratively bring together ideas on every aspect, not just acrobatics, everyone gets involved in development for costumes, set, general aesthetics and soundscape. Of course each of these jobs are done by a professional, but we come to decisions/choices as a team," he tells me. "We've honed the process a lot more recently and the show will always be ready just before you go on stage the first time. Doesn’t matter if that’s a month long process or two years. It always feels like it's only just comes together!"

Not happy to settle with one show during the festival, the company are also preparing for a second outing with the late night antics of Circus-Cision. "The show is our up late cabaret show and no two shows are the same. It’s a variety circus show hosted by us and we get our best and most talented friends and artists in the festival to come on stage with us," Gorham says. "It’s an awesome party, lots of fun, super high skill, and lots of shit goes down."

1. If you had to name your child after a fruit/vegetable what would it be?
Kalamata. Just because it sounds great. Wait, maybe just Olive because it's actually a name.

2. Which reality TV show would you most like to appear/compete on?
Nailed it!  The fun one where they get to bake.

3. A movie that sums up my life is Robin Hood: Men in Tights.
4. What's the one thing that happened during a show you were involved with that you wish you could forget?
With circus the biggest thing is injuries. I tore my ACL, meniscus and a few supporting structures in my knee in a show in February and am still recovering.
5. Art is absolutely necessary.