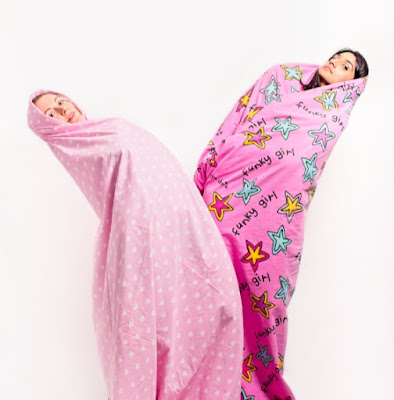 Girls love their sleepovers. A lot. So much in fact, that Emma Smith and Vidya Rajan are hosting their very own sleepover party during the Melbourne Fringe Festival. Sleepover Gurlz will take place in a bedroom in the inner North suburbs where Smith and Rajanare will entertain their fellow sleepover guests with all the cute things girls do and like, with a dollop of feminism.

"Sleepover Gurlz is about what could happen when two adult women are so exhausted with the world that they retire to the last place they remember having true agency - the sleepover. They eat some snacks, kiss some posters and begin to question whether this nostalgic utopia really is free from the grinding oppressions they sought to escape," Smith explains.

"It’s also a show about processing," Rajan adds. "What does retreat look and feel like? How do we give that moment of escape from public space its due? It’s a show about how women are justified if they feel the need to collapse and how their bedrooms are extensions of their mind."

Taking on the novelty of a sleepover party, the two arts makers intend to open up conversation on identity and the pressures of conforming to stereotypes and being a 'good citizen'. "Initially, it was an idea for a contemporary comedy set in a bedroom where two anxiety stricken professional women had panic attacks in front of a live audience." Smith says. "In the course of many very long discussions about our own anxieties and personal disenchantments with the world, Sleepover Gurlz morphed into an examination of the big lies and crushing pressures of our childhoods, and the ways in which we were both socialised to take personal responsibility for structural inequalities."

"The lie of the 'good worker', the 'good migrant' or the 'good woman', come to mind here; narratives that blame the victims of rigged systems for not working hard enough, or acclimatising fully enough, or leaning in far enough to the systems that oppress them. It's gross and absurd and utterly shameless, and I hope the work reflects that."

"What intrigued me about them, and what we’ve really excavated in the show is, that despite being the first taste of girlhood for many, sleepovers are actually a really patriarchal space," Rajan says. "They’re part of the lie of things and it starts so early! So though they seem this place of solidarity and freedom, they actually have huge elements of control and policing your friends and activities that keep defining you in relation to men."

While it's all fun and games, manicures and pillow fights are not what Rajan and Smith want audiences to walk away with after seeing Sleepover Gurlz. "We want people to have a good time, but then to get out into the world and topple the systems that have us tied to a runaway freight train to apocalypse." With three performances already sold out, it seems like this will be one of the parties to be at during the Melbourne Fringe.

Emma: a relief.
Vidya: a way of being in love with the world, even when it's about hard things.
2. If you had to become an animal, which would you choose and why?
Emma: I’m already an animal but I’m interested to know what being a worm is like. Eating as a mode of locomotion is deeply interesting to me.
Vidya: I'm really into birds. A crow I think, or a cockatiel.
3. What song would you play on repeat to torture someone?
Emma: A symphony of phone notifications, car horns and close-the-fridge-door beeps.
Vidya:  We all remember Crazy Frog right?
4. How long would you survive in a zombie apocalypse?
Emma: Not long, but I’m still here, so...
Vidya: I have no useful skills.  I would volunteer as a zombie court jester in the hopes of being kept alive but I doubt that would work.
5. It just isn't a Fringe Festival experience without
Emma: electro swing DJs. No idea why that might be.
Vidya: feeling overwhelmed and dancing.