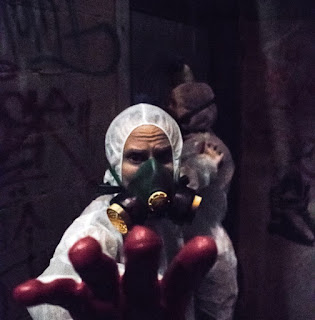 For years now, the Earth has been a site of devastation with humans now forced to live underground in various bunkers throughout the world. Cyprus Pod has been home to a community of people for 15 years, and all is as normal as can be until a Messenger arrives with a request for the pod to take on eight more people. With her, she brings three of the eight who are given the task to familiarise themselves with Cyprus Pod and endear themselves to the residents. With limited rations and space, the survivors must decide if they will allow these eight people to stay or turn them away. So begins Never Ending Night, an immersive theatre show presented by Libby Brockman and Russell Sims.

In this show, audience members are permitted to explore the pod and observe and listen to the various conversations happening between the residents, the Messenger and the Messenger’s guests. The nature of an immersive show such as this is that everyone will have a different experience depending on who they follow but the conclusion should provide enough information to put all the pieces of the puzzle together even if they have missed certain scenes. In this instance, I chose to shadow one of the messenger’s guests who tries to charm and manipulate his way into the pod. While initially an interesting character, his scenes and dialogue began to get slightly repetitive with his constant advances towards his female counterpart and in his belief that a place should be made for him because he is young, strong and fertile.

Co-written by Bridgette Burton, Amelia Newman and Keith Gow, the show raises some interesting questions on not only how much compassion we have but also how much we are willing to give. However, there were scenes where it felt quite improvised with conversations between the characters not leading anywhere significant. I also felt more time should have been spent with the Messenger’s guests talking to the residents rather than the three of them huddling together and talking about the importance of being accepted by the pod.

A show about the end of the world could not ask for a better location than where Never Ending Night is held: the Collingwood Underground Carpark. This cold, dark, large and empty space instantly creates an environment where the world as we know it is gone, and humans now resort to scavenging to survive. Makeshift homes, exercise equipment and inventions that now keep them alive are displayed throughout the pod. The only downside to this venue is the acoustics and being able to hear conversations being had. Unless you happened to be standing directly next to the actors, there were times you could barely make out what was being said, which was made even more difficult if a louder conversation was happening nearby.


Never Ending Night is presented by Brockman and Sims as a response to the current treatment of refugees from the Australian Government. As such, the pod’s decision on whether to accept these people or turn them away has stronger implications in our own reactions to this. While there are some areas that still need tightening and focus, the issues this production raises leaves you questioning what your decision would be and how you would be able to justify it.

Click here for my interview with one of the co-writers of Never Ending Night, Keith Gow.