Do You Know Me? - Melbourne Fringe Festival preview 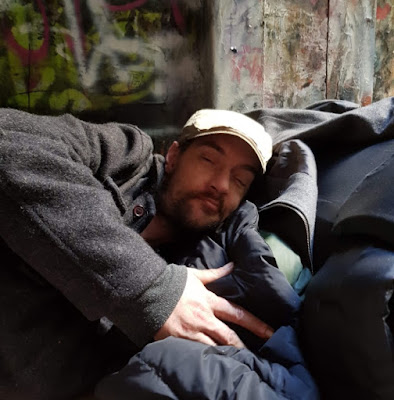 Melbourne Fringe Festival is a great opportunity to experience shows that you wouldn't ordinarily get the opportunity to see. Written by Tiffany Barton and Kim Ho, Do You Know Me? is one such example with a site-specific immersive show that shares the stories of Melbourne's homeless people and rough sleepers.

Barton had never worked with Ho before and their collaboration was borne from a chance assignment during their Master of Performance Writing studies at VCA. "We were sent on a field trip to explore an area in the city and come back with a pitch for a site specific play. We went to Degraves Street and got talking to two homeless men who impressed us with their clarity and likeability," she recalls. "We pitched the idea for a site specific play about homelessness and the idea stuck."

The dozen interviews Barton undertook in preparation for writing the show, while eye opening, also resulted in some personally difficult moments in witnessing the effects homelessness had had on her participants. "Interviewing rough sleepers was rich at times and heart breaking at others, but it enabled me to drop a lot of judgements and preconceptions of rough sleepers. I met so many good people, who are warm, kind and generous and I had many epiphanies about how utterly wrong it is that this is still a problem in a country as wealthy as Australia."

"It was really hard to witness the suffering of one of my interviewees in particular. He's been homeless for five years and suffers terribly from the cold," Barton explains. "He says he was bashed his first year on the streets and his ID was stolen so he couldn't get Centrelink. I find it hard to believe that in all that time social services have not been able to help him replace his ID and get some welfare. His goal every day is to make $25 for a room in a shelter that night, but he's so exhausted he often doesn't make it. He suffers terribly from the cold and spends most nights walking around to stay warm, and sleeps during the day on Degraves Street or in the library where the security guard regularly tells him he can't lie on the floor. One day I took $100 in to him in the library and he honestly looked like he was dying. He was so pale and weak he could barely talk. He looked utterly broken by his situation and I wondered how he continues to survive like this."


While there were the typical challenges in creating site-specific work, working with people who were homeless added another set of challenges and awareness to what Barton and her team were looking to create. "We were very aware of the ethics of what we were doing, so we made sure we kept checking in on people and that they were ok with us using their stories and how we could keep helping them once the performance is over," she says. "At some point early on I realised that I needed to take on an advocacy role for some of them, and I stopped interviewing people after that because I needed that advocacy role to be sustainable for me."

Ultimately, Barton hopes audiences see Do You Know Me? as a call to action for people to support those who are homeless and become their advocates. "I want people to consider what they can do to help the homeless. These people have no voice and little agency, so we can start making a difference just by talking to them." Barton tells me. "From posting regularly on social media about their struggles, Kim and I were able to raise $2,500 to help the participants in our show. I was amazed at how quickly and generously the community was moved and felt compassion for those sleeping rough once they had a little information about how much people I interviewed were suffering."

1. Art is the shit.
2. If you had to become an animal, which would you choose and why?
A lion, so I could roar loudly whenever I like.
3. What song would you play on repeat to torture someone?
"Barbara Streisand" by Duck Sauce.
4. How long would you survive in a zombie apocalypse?
A couple of days at least! I'd like to think I could give a few zombies a run for their money.
5. It just isn't a Fringe Festival experience without vagina puppetry by Betty Grumble - is she in this year? Love her so much! (sadly not - Myron)