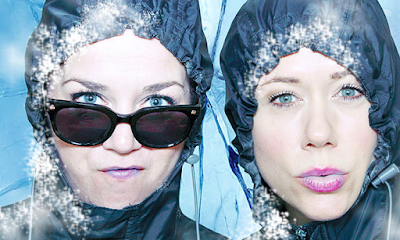 With the number of physical theatre and clowning shows in the Melbourne International Comedy Festival, it can become difficult to decide which one is worth your time and money. If you were to take a gamble with UK duo The Kagools (Nicola Wilkinson and Claire Ford) and their show Kula, it would be a pretty safe bet that you would walk out in a pretty damn good mood. The show was the winner of best comedy at the 2017 Adelaide Fringe Weekly Awards and it's easy to see why.

While it takes a little while to warm to their style of humour, once the two have got you under their spell, there’s no turning back. Kula is reliant on audience participation and the ones chosen in this instance are all more than happy to go along for the ride. Wilkinson and Ford find humour in the simplest of things, yet things we wouldn't ordinarily see the humour in as an adult, which is a shame because watching a volunteer attempt to eat a biscuit that is resting on his face - without using his hands - is one of the funniest things I’ve seen during this festival.


The mixing of pre-recorded scenes playing on a projector and live performance adds to the randomness of the acts and the characters being presented, which are also supported by the banging 80s and 90s pop songs soundtrack. Wilkinson and Ford seem very much at ease as The Kagools and even with a few technical hitches on opening night with the projections, they remain in character and appear to take it all in their stride - despite what 'inside voice' expletives might be running through their minds.

The show is entirely mimed and silent, and it’s a great reminder of how we don’t always need to use our voice to communicate with others. Sometimes a look or a gesture is enough to build a connection with the audience and create a welcoming feeling in the room by being accessible to people from many backgrounds including speakers of languages other than English and for those hard of hearing or deaf.

Kula is a Sanskrit word that can be translated to 'community' or 'tribe'. With their show of the same name, The Kagools succeed in creating a community with the audience and allow everyone to join - and celebrate - in their unique physical theatre and comedy.