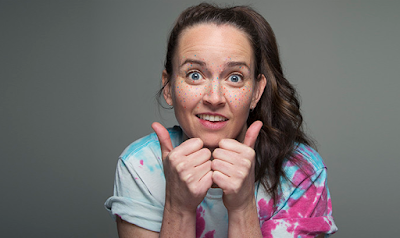 Zoë Coombs Marr may be a well-known name in the comedy world but her face has not been as recognisable as for the last six years, she has been performing as a man: the misogynistic and sexist Barry award winning Dave. With Bossy Bottom, Coombs Marr has chosen to explore what it’s like to be herself, a woman and a comedian. Unlike her previous shows, we are informed that there will be no gimmicks, props, sound cues, guest stars, random set ups or call backs. Bossy Bottom will be strictly jokes. Just jokes. Nothing but jokes. But bloody good jokes.

Having never seen her perform as Dave, Coombs Marr seems more than comfortable taking to the stage as herself. The high level of energy with which she begins the show and maintains throughout, and her welcoming interactions with the audience immediately wins us over and has us completely on board with her hour of sharp observations on the world today.

Topics range from heterosexual relationships (they do exist), feminism and being a lesbian in her thirties, and while these are not exactly ground-breaking in stand-up routines, Coombs Marr shares her insights in such a way that make them fresh and exciting. Her explanation as to why she hates all men is utterly hilarious and showcases her skill in being able to take one idea and becoming more and more ridiculous with her dissection of it, while remaining focused on the bigger picture.

Bossy Bottom is a smashing hour of brilliant jokes, and if this is how funny Coombs Marr is when she is performing as herself, let’s hope we get to see more of her. Oh, and there’s also some damn good gimmicks, props, sound cues, guest stars and clever set ups and call backs.