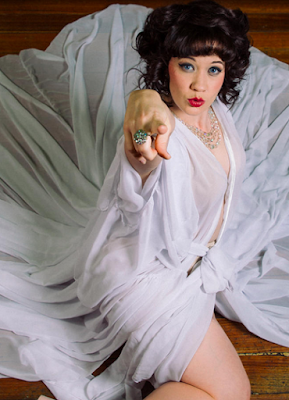 Mummy Num Nums is a name you'll never forget after this Melbourne Fringe Festival experience. The Hollywood starlet has had an illustrious career as long as both your arms put together. Her wide range of movie sequels to sequels include Dunston Checks in 4: Dunston Checks Out but her career has somewhat stagnated, so Mummy is on a mission to reclaim her place back on top of the Hollywood food chain, but first she has to contend with Bette bloody Midler.

The eponymous star of Mummy: A Sexy Comedy Party is played to dazzling perfection by Brianna Williams in this part sketch comedy, part improvised show. Williams has a commanding presence on stage and knows how to charm an audience. She is at total ease with her character and is clearly having a lot of fun with her.

To help Mummy get her career back on track however, she has enlisted some well known - to her anyway - people to come and chat to her. Each performance of Mummy: A Sexy Comedy Party has three different performers and on this evening, I was fortunate enough to have Sarah Reuben, Martin Dunlop and Aunty Donna's Broden Kelly. Unlike the introduction to the show, these interactions are completely improvised and it's always fun for an audience member to see performers lost for words and unable to contain their laughter on stage.

Laughter is most definitely infectious and it spreads through the room, particularly once Kelly appears on stage. His conversation with Mummy about the best way to get to Melbourne from Colac should be boring but it ends up being utterly hilarious. There are a few moments with the guests that don't quite hit the mark and maybe some work needs to be done in ensuring that while the content is improvised, the relationships are more established.

Williams uses the show to also make a few pointed remarks on how women are viewed and treated by society but particularly under the Hollywood glare where they are so often relegated to roles such as the sexy young musician, the sexy young teacher or the sexy young thing. Young young young. While Mummy is wise enough to not disclose her age to it, it feels like she has been around forever, given her career and the stories she shares. In one way, she can be seen as the representation of all women throughout Hollywood.

Mummy: A Sexy Comedy Party is a strong character driven piece and Williams displays great skill in this style of comedy. With different guests every night it's a show you can keep going back to for more fun times. Mummy may despise Bette Midler, but she can rest assured that her audience will love her.