So two and a half weeks of craziness come to an end yet again! With work and study commitments, I was only able to attend a dismal 48 films this, one less than last year! So I now present you my Top 10 movies from the 2016 Melbourne International Film Festival.

Probably one of the most divisive films of the festival with strong opinions by all, and all with valid reasons, but I loved the way it was filmed, with some beautiful camera work and editing. The soundtrack by Cliff Martinez is incredible and I am still listening to it pretty much on a daily basis. The cast are great - especially Elle Fanning and Jena Malone - and direction by Nicolas Winding Refn is slick and effective.

My only criticism is that it could have ended a little sooner than when it did. People who've seen the film will probably be able to guess as to which scene should have been the final scene, as it is a very strong scene.

This documentary on how one man, Owen Suskind, was able to use Disney movies to reintegrate himself into society and re-learn how to read, write and how to communicate, after being diagnosed with autism. This was one of the most heartwarming documentaries I've seen in a long time that left me with lots of tears in my eyes.

Seeing Owen's father, Ron, talk about his love for his son and witnessing their relationship was truly touching. The scene where he is helping Owen put on a tie had minimal dialogue but so much was said with the way they looked at each other.

There really is no way this documentary could not make you feel anything but warmth and goodness.

This was a film I knew I had to see but no idea what it was about, and I was so glad I did because the 2.5 hours spent watching it just flew by as each layer of the story was meticulously revealed to us. The chemistry between the three leads, Kim Tae-ri, Ha Jung-woo and Kim Min-hee, is mesmerizing to watch and the cinematography is rich and lush in aesthetic delights.

Turns out, I've actually seen quite a lot of Park Chan-wook's films but am glad I didn't remember as I think some of the surprises might have had lesser effect. But definitely need to have a re-watch of hos earlier films.

I haven't seen a zombie film this enjoyable in a very long time. With all the tropes covered, it is still full of fun, laughs, surprises and scares - I even jumped twice and I never do that in movies. This reminded me a little of "Snakes on a Plane", instead our heroes are now combating zombies on a train.

There is definitely nothing new to this film but Yeon Sang-ho's film stays true to the zombie genre and doesn't try to make it anything more. However, his play with moral and social conscience and how they can sometimes not be in our own best interest is interesting to watch unfold.

My first of three Aussie films in my top 10 and it was a relentless 90 minutes of pure terror. A couple decide to go camping for the weekend and lo and behold, they come across some nutters who have decided to hunt them down. Like zombie films, this has been done to death (pardon the pun) but the way Damien Power (writer and director) chooses to tell this story adds a new spin to the genre and I was pleased and surprised with how the story decided to end. The two leads - Harriet Dyer and Ian Meadows - had some amazing chemistry and I found myself rooting for them from the very beginning.

What I loved about this film is that there is no gratuitous gore and any violence shown on screen is used well within the context of the film. Most of the horror, in my opinion, is psychological.

Sadly no trailer or any clips to show, so here's a picture of the two crazies you should stay away from: 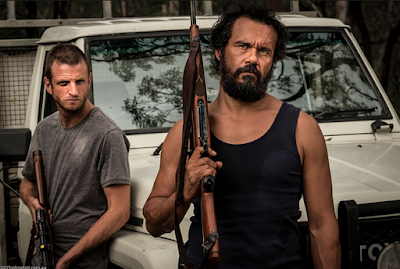 My second favourite Aussie film of the festival and I absolutely adored it. Directed by Neil Triffett (who is a pretty amazing playwright) it looks at am emo teen who is trying to make it at his new school after being expelled from his old one for attempting suicide. While this sounds heavy and dark it is the complete opposite, which is why it had such an effect on me.

The original songs and music are very audience friendly and am already eager to seek out the soundtrack! Triffett deals with the issues of sexuality, identity and just being true to yourself in a way that doesn't preach to teenagers (or adults) but has them questioning their choices and why they do the things they do.

The young cast of relatively fresh faces (as far as I could tell) embrace their characters and really go with them. Hopefully this gets a release soon, and maybe a stage production too!

The trailer is below but so is the original short film this was based on. While there are considerable changes, you can get an idea as to the feel of the film.

My third and final Aussie film in my top ten. I went into this one with minimal expectations and walked away touched with how it chose to explore a young girl's journey to overcoming fear and anxiety as she steps into adulthood.

Rosemary Myer's direction and Matthew Whittet's adaptation of the same play that he wrote show that theatre can easily be adapted to film and still retain its magic and charm. The cast are great, especially Harrison Feldman and Amber McMahon and the pre-teen "Neon Demon" girls are hilarious.

I've also made it a clause in any parties I host that all guests must now enter to a choreographed dance routine.

Only the second documentary in my top ten. We follow Benjamin Millepied and the Paris Opera Ballet as they prepare to stage his first show for 2015, "Clear, Loud, Bright, Forward". While it's low on dramatic tension it is a rare and interesting look at the behind the scenes of a ballet company in its attempts to change the way it operates.

What I find interesting about this is a few months later, Artistic Director, resigned from the company as he felt unable to take the company in the direction that it needed to go in.

This intense psychological thriller is perfectly cast with Isabelle Huppert as our eponymous victim...or is she? My interpretation of the film largely changes the feelings towards all the characters and paints Elle as more of a perpetrator than a victim, which I think is reflective of her actions and motivations.

The story has you guessing to the very end and even when the big reveal is made, there are still a lot of questions as to what happens next. Its best to go in not knowing much about this film but if you insist, the trailer is below, but I think it gives away a big plot point and who wants that?

So glad this played at one of the Sunday surprise sessions because it really is a gem of a film that is extremely heartfelt and touching! SO much to love about this. The performances by Sandra Hüller and Peter Simonischek are brilliant and the supporting cast is just as strong.

Touching story of remaining connected with each other and never losing sight of the bigger picture. The final 45 minutes is just absurd movie magic but it all works and is completely believable. Much to mull over with this one.