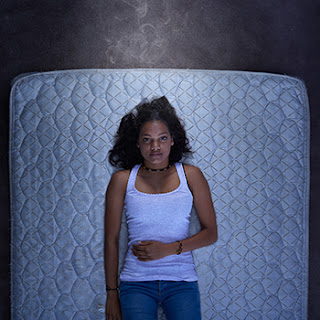 Sugarland, the latest production by the Australian Theatre for Young People, is a play that revolves around the experiences of a group of teenagers living in Katherine, Northern Territory. With an upcoming singing competition as its focus, it’s a gritty and honest look at the challenges and difficulties teenagers in rural Australia often face, including homelessness, domestic violence, drugs and suicide.

The young cast played by Narek Arman, Xanthe Paige, Calen Tassone, Jonas Thomson and Dubs Yunupingu, have a deep understanding of the characters and their motivations, and develop them carefully into complex human beings. Under the watchful direction of Fraser Corfield and David Page, the five actors explore who these people are as the characters figure out where they belong in this mixed-up world. The choreography of the boxing fight between Jimmy and Aaron (Tassone and Arman) in particular is impressively directed, with both actors clearly in the moment and allowing their characters to take control of the situation.

Written by Rachael Coopes with Wayne Blair, the script and story remain plausibly natural and authentic: we believe this is the language that children are using, this is the way that children are feeling, and this is the way that children are behaving and finding a release from the difficulties they are facing. The choking scene between Jimmy and Erica (Paige) is one of the most intense and possibly disturbing scenes I have seen in theatre for quite some time. Meanwhile, Aaron’s singing of his sister’s Iraqi song, with Arman’s voice breaking right at the very end of it, is a great example of how the writing and performances portray what the characters are going through without needing to say much at all.

While there are a few scenes that lack the required dramatic tension, such as Nina’s (Yunupingu) performance in the singing contest and her solution to getting her own house coming quite out of the blue, Sugarland still manages to be very effective in revealing the emotions of these teenagers as something genuine.

Jacob Nash‘s set design of red dirt and concrete-like tables and chairs are a strong reminder of the land these children inhabit, but also of the harsh, cold reality of the situations they face. The sound design by Guy Webster and the tour lighting design by Karen Norris further heighten the desperation and frustration that these characters are feeling throughout the play.

There is no immediate happy ending in Sugarland – maybe there is no happy ending at all – but it does finish on a note of hopefulness and positivity. If we want change to occur, we all need to want that change, and fight for it together. As one character states, “it’s about seeing past the bullshit and doing the right thing”. There really is no other way.

Sugarland was performed by the Australian Theatre for Young People at Arts Centre Melbourne between 19 -21 May 2016.

Myron My
Performing arts writer and reviewer based in Melbourne. Also: TV. But never binge. Film. Running. Hiking. Board games. Switch. Lived in Kyoto & London. Comedy value in everything. Fascinating as well as sexy.