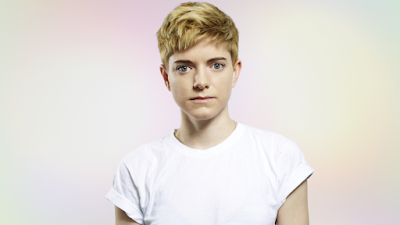 Canadian-born, London-based Mae Martin is debuting her solo show in Australia at the Melbourne International Comedy Festival. Called Us, the show explores the labels that people give us and the labels that we give ourselves. Martin's look at a variety of themes including identity, sexuality and loneliness made her one of the breakthrough performers at Edinburgh Fringe and she is more than a little bit excited to be heading over to our shores with Us.

"I've always wanted to do the Melbourne Comedy Festival because everyone raves about it and I'm so excited to have been invited," she says. "I'm also a huge fan of very long flights. If I don't get served at least 3 meals on a flight I don't feel I've got my money's worth, so this is perfect for me. I'll watch 17 films."

Martin has been performing in stand-up since she was 13 years old, and over time her wit, social observations and commentary have won her a legion of fans. However, there are still some cringe worthy moments she'd like to forget about. "There have been abut seven hundred million actually. I started doing comedy as a rebellious teenager and I did some very self indulgent and embarrassing stuff on stage. I did a show on my 16th birthday called Jailbait, which I wish I could erase from the memories of anyone present for that!"

Through her shows, Martin realised that people were not only laughing along to her show, but where actually wanting to open conversation on the issues she was mentioning. "I've touched on gender binaries and labels in the past, and with each show I did, I noticed that that's the stuff that people wanted to discuss with me after, so I thought why not focus a bit more on it," Martin explains.

"Us is about sexuality, and whether we need to re-evaluate the way we think about it. I think young people are moving away from feeling they have to identify one way or the other, and that's really exciting. It's also (most importantly) just a stand-up comedy show with some funny jokes. It's not a 'gay' show - it's a show about sexuality, which is a subject that everyone on the planet can engage with and has a personal experience of. Ultimately, I hope people come away feeling very happy and unified, challenging their own conceptions of sexuality, and then I hope they come and ask me on a date!"

If you had to name your child after a vegetable what would it be?
Spud. Is a potato a vegetable?

Which reality TV show would you most like to appear/compete on?

SURVIVOR IS THE KING OF ALL SHOWS. I've seen every season.

The most irritating habit I have is over-sharing. Every time someone casually asks me how I'm doing I tell them my life story.

What's a song that sums up your life?
People by Barbra Streisand.

While in Melbourne, I really really really want to see Tom Green live at the festival, meet a koala and not meet a shark/spider/snake.