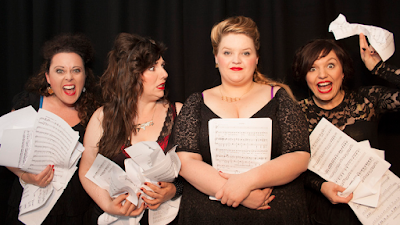 Returning for a second time to the Melbourne International Comedy Festival this year are four women bravely taking on the world's most famous male musicians. Lady Sings It Better's Here To Save The World is a humourous yet eye-opening look at pop, rock, r&b and hip-hop and revealing the blatant misogynism in the lyrics and the strange themes explored in the songs. Last year, the group covered Baha Men's Who Let The Dogs Out? and Fountain of Wayne's seriously disturbing Stacey's Mom, and I for one, am extremely eager to see what they come up with for this cabaret show.

"I am stupidly excited about the new show!" Maeve Marsden, Artistic Director and member of Lady Sings It Better exclaims. "We’re doing a Prince medley which is great because his music is so good. Libby Wood is singing Last Night by Az Yet and we’ve learnt all the dance moves from their AMAZING 90s music video. We’re exploring the various ways that Kanye West has talked about his dick and we’re covering Sorry by Justin Bieber in a fairly surprising way, which I am excited about because it means I get to watch its amazing video to practice. And the show is superhero themed so we have an epic superhero medley to kick it off!"

Despite this being only their second comedy festival in Melbourne, Lady Sings It Better has been performing for seven years, and have gone from strength to strength, including a recent Green Room Award nomination for Best Musical Direction in Cabaret. "Our first cabaret season was in 2009 but the show has evolved so much becoming funnier, naughtier, weirder and more adventurous. The idea grew out of my desire to create a group that sang songs written by men, to play with assumptions about masculinity and femininity in pop culture, to poke fun at misogynist lyrics and so forth," Marsden explains.

"Our collective music knowledge and humour has built on that and now, we’ve got a comedy cabaret that isn’t your traditional glamorous cabaret but is still decidedly sexual. Our humour is sometimes awkward and self-deprecating, and sometimes it is terrifyingly self-assured. We’ve always been focused first and foremost on the music though – what can we do with these songs to surprise people and turn them on their heads?"

With all the positive feedback and recognition the group has received, there are still detractors who call them misandrists and critiquing them on the very thing they are speaking out for. "Our feminism is fairly accessible in that it’s fun, funny and for everyone. The show doesn’t attack pop culture, it plays with it and welcomes people in to our readings of songs," she explains. "That said we’ve had reviews that comment on our bodies, we’ve had audience members say the show was too sexual to be feminist and others say it’s not sexy enough!"

"We released a video late last year, Crying (on the right), making fun of online misogynist bullying and the trolls went to town on our YouTube channel with lots of aggressive comments – I just stopped reading them. As I said, though, mostly we get great responses and we’ll often have people who don’t identify as feminists telling us after the show that they were ‘dragged along’ but really loved it."

"At the end of the day, if people are laughing and smiling we’ve done our job. We’re not telling people they can’t like the more offensive songs we sing, hell, we even like a lot of them!" Marsden says. "We once had a reviewer say the show had her listening to the radio a little differently on the drive home. That pleased me – we should all listen to and critique the messaging in pop culture and if some of the dark themes we unearth in well known songs get you to do that, well good."

If you had to name your child after a vegetable what would it be?
Radish

Which reality TV show would you most like to appear/compete on?
SURVIVOR OBVIOUSLY, BECAUSE IT WOULD BE AMAZING.

The most irritating habit I have is being a nerdy stickler for rehearsing and warming up. We’re the daggiest comedians ever.

What's a song that sums up your life?
I’m Your Man by Leonard Cohen ;-)

Check out the group's Patreon account, where you can make monthly pledges to support them in return for discount codes to shows, exclusive offers, recording, videos and more.
Posted by Myron My at 10:21