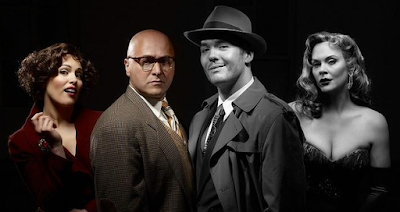 Despite being first performed 26 years ago, the book by Larry Gelbart still come across as fresh and relevant. It may be a little politically incorrect and chauvinistic for current times (despite being mediated through characters we’re invited to critique) but the cheeky wit and cleverness of the script and the direction of Martin Croft ensure you still enjoy watching the relationships being depicted on stage. Led by Musical Director Kellie Dickerson, the live band superbly bring to life the upbeat challenging jazz score by Cy Coleman and the cast certainly do justice to David Zippel’s sharp lyrics in their performances.

City of Angels offers two stories simultaneously told on stage. In one, mystery writer, Stine (Anton Berezin), is attempting to perfect his latest film noir script while at the mercy of Hollywood film mogul, Buddy Fidler (Troy Sussman). In contrast, the second story (depicted entirely in black and white costumes and set pieces), has the audience entering Stine's fiction where private investigator Stone (Kane Alexander) is hired by Alaura Kingsley (Anne Wood) to locate her missing stepdaughter and from there on, the plot thickens and the lines between reality and fantasy start blurring.

The whole cast are exemplary in their portrayals of their characters, including elegant body language and accents, with many playing dual roles as they cross over between stories. Berezin and Alexander are highly entertaining to watch as each one faces their own personal struggles, as well as having to deal with each other. Their famous duet, "You're Nothing Without Me" is a powerhouse number and stays with you long after the curtain drops.

Amanda Harrison as Donna and Oolie, while not having much stage time, is a consummate scene-stealer and her spectacular renditions of "You Can Always Count On Me" and "What You Don't Know About Women" (with Chelsea Plumley) are highlights of the evening. Wood is a superb choice as the sultry femme fatale Alaura Kinglsey and her chemistry with Alexander has you hanging off their every word and action.

City of Angels has much love and respect for the film noir genre while poking fun at its tropes. This production is a sharp and highly amusing show with some stunning performances form its cast. The only thing criminal about Life Like Company's latest theatrical creation is that it is on for only four nights, as many more people should be given the opportunity to experience its bite and brilliance.

City of Angels was performed at the Arts Centre between 5 - 8 November 2015.

* Original review appeared on Theatre Press on 8 November
Posted by Myron My at 20:23