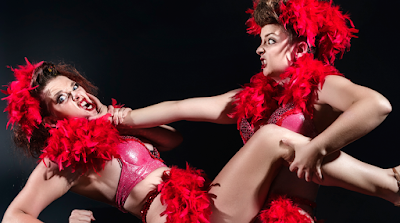 Presented as part of the 2015 Melbourne Fringe Festival, Top Spot is a one-woman show performed by two blonde bombshells, Gloria and Delia. Well no, it's just Gloria's show. But actually it's really Deliah's show. Either way, it's a great evening of cabaret, burlesque and comedy as the two women fight it out for the highly coveted "top spot" in the eyes of the audience.

Having been working together since 2013, Stephanie Marion Wood (Gloria) and Elizabeth Dawson-Smith (Deliah) are a perfectly matched and complimentary team to watch on stage together. Having previously seen the two perform twice in Miss Friby's Two Pound Parlour, I expected to be in for a night of naughty hijinks and I was not disappointed.

In Top Spot, the two women are in a constant battle to "one-up" each other, where just considering the mere thought of sharing the spotlight is met with indignation and revulsion. The fun, high energy acts throughout the show and the brilliant costumes on display clearly indicate the time and effort the women have gone to in creating this show. However, the scenes where Wood and Dawson-Smith are conversing with each other or the audience waver in their humour and comedy and still needs some refining.

While I'm not convinced a 60 minute show needs to have an intermission and making the show run 15 minutes over its advertised time, the second half of Top Spot is by far the stronger of the two, beginning with an amazing visual and vocal rendition of Sia's "Chandelier". Wood and Dawson-Smith are both extremely endearing on stage and know how to turn on the charm to win us over. The audience warms to them immediately so that when we reach the audience participation required comedy segment "What Will You Do For a Cocktail?", very little resistance or hesitation is present.

As much as Delia and Gloria would hate me for saying this, there is no place for an individual "top spot" in this show. Both Wood and Dawson-Smith shine in Top Spot and dazzle us with an array of entertaining acts that result in a very enjoyable night.

* Original review appeared on Theatre Press on 2 October
Posted by Myron My at 18:18