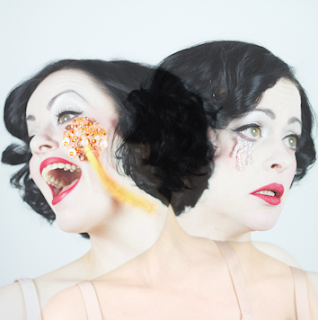 Fittingly having her Melbourne premiere of Shake at The Butterfly Club, Becky Lou lives up to its name. Twirling tassels, bouncing breasts and jiggling buttocks; there is a lot of shaking going on. However, there is more to this show than just sexy and entertaining burlesque routines, as they are interspersed with Becky Lou's musings on significant moments in her life that have led to her career as a burlesque performer.

Shake is a well-crafted show that allows Becky Lou to expose herself in more than just the literal sense. Beginning with memories of her four-year-old self dancing topless in a supermarket to Madonna's Like A Virgin, each story that Becky Lou shares has a purpose. It's not for entertainment value, it's not to shock us, but it's to strengthen the relationship women have with their body.
Women are being constantly told to cover up yet to "show us ya tits", made to feel imperfect yet are subjected to continuous sexual harassment. What Becky Lou does with Shake is allow women to reclaim their body, to own their body and be proud of it. In this regard, Shake reminded me of a similarly beautiful and thought provoking show in Maude Davey's My Life In The Nude.

Like so many burlesque performers, these women should not be congratulated or fawned over for being "brave" about performing nude. They should be admired for being strong women who love their bodies and for taking power away from the male gaze. Becky Lou shares stories from her life in a non-confrontational way so that she does not create a divide with the audience. With a fine balance of comedy timing and frustration and derision towards a patriarchal society, we are all equally disgusted when she informs us of the policeman who wolf-whistled at her when she was just fourteen.

The burlesque routines, in Shake highlight the skill and creativity that has had Becky Lou crowned Miss Burlesque Victoria in 2013, as well as numerous other titles. She captures the sexiness and the mischief of the art form but each number is unique in style, costume and the character that she takes. The most memorable ones of the evening were her opening and closing numbers, the latter bringing her story full circle and the former showing us exactly why she is a force to be reckoned with in the world of burlesque.

Shake is more than just a show to titillate or excite us. There is heart and truth in the stories that Becky Lou shares with us, and with the message that she wants to get across. At one point, she confesses that she is most nervous about using her voice in the show because it's not something she usually does in burlesque. She needn't be nervous at all though, because we are enthralled by every word she says just as much as every item of clothing she removes.