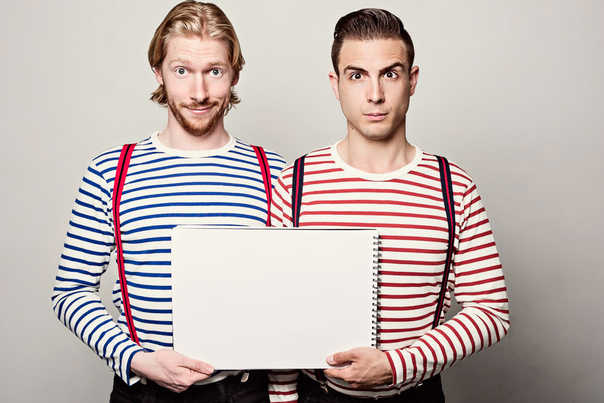 Performing an improvised comedy show can be more terrifying than performing stand up. You have no idea what's going to happen next from both your fellow cast and the audience. In essence, you have no safety net. You'd think that's risky enough but the Quiet Achiever's have taken it a step further with their Melbourne International Comedy Festival show and taken away a comedian's most powerful tool; their voice.

With nothing but a musical soundtrack of 500 songs played at random, the Quiet Achievers (Andrew Strano and Charlie Sturgeon) set out to captivate us with a mixed bag of silent impro sketches. As with any impro show, there is always a chance scenes will not hit the mark and with this show there are moments when stories do fizzle out with an awkward ending or the story gets convoluted and confusing.


However, the two are charming and affable enough to get the audience on side early on so even when things go haywire, we don't mind and appreciate the performance. There are some brilliant moments from this talented duo though, including the kite flying love story and their story about the little bird that learnt how to stand up for itself.

Strano and Sturgeon are a great pair to watch on stage. Strano's comedy man to Sturgeon's straight man are highly complimentary and the two have a great connection on stage. They are constantly aware of each other and what they are doing and work hard (but seemingly easily) at giving each other a good time and making their partner look good. They happily accept every offer in advancing the story with confidence and a sense of fun.

There are a number of improvised comedy shows on during the Melbourne International Comedy Festival, but if you're looking for something a little different, a little riskier but very rewarding, then the Quiet Achievers is the show for you.