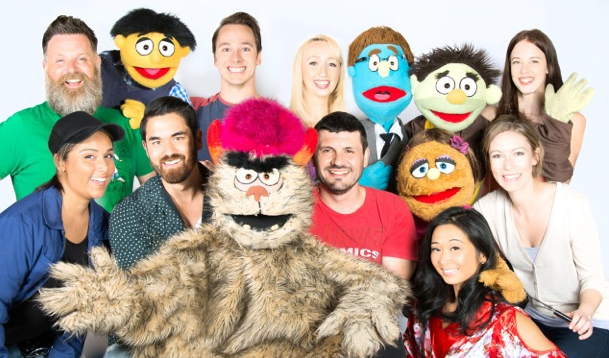 Having seen the West End production six years ago (and remembering it strongly), I had high expectations for Trifle Theatre Company's production of Avenue Q. Furthermore, I had some reservations as to whether it could match the magic of my original viewing, but within the first few minutes that doubt disappeared. We may only be in March but I can confidently say that this will be one of the best shows I see this year.

The story follows a recent college graduate, Princeton (played by Jordan Pollard), who is a little wet behind the ears and entering the "real world". Moving to Avenue Q (the best he can afford) he gets acquainted with the locals, including Kate Monster (played by Sarah Golding), Trekkie Monster (played by the wonderful Andy McDougall), married human couple Christmas Eve and Brian (Leah Lim and Michael Linder) and Gary Coleman (in an interesting casting choice, played by Zuleika Khan).

Lighting work by Jason Bovaird captures the mood of the characters and the environment brilliantly and the stage design by Jacob Battista authentically replicates a shabby, down-town New York city block. The six piece band however, led by Musical Director David Wisken, are truly amazing in their unseen performance in a separate room to the small stage.

Avenue Q pushes boundaries between clever and lewd and the only way it succeeds is because puppets can get away with a lot more on stage than any actor could. With a big dose of disbelief, it perfectly blends the innocence of a childhood with the scary realisations of adulthood and creates an uplifting and affirming story about change and transition. Director Stephen Wheat should be congratulated on not only creating a show that is on par with its predecessors but also allowing it to form its own individuality and uniqueness.

* Original review appeared on Theatre Press on 30 March
Posted by Myron My at 22:12