Originally commissioned for French theatre company Tabula Rasa, the English-language premiere of Dreamers presented by fortyfivedownstairs could easily be a narrative born straight out of current Australian politics and newspapers. The story follows a young Muslim refugee, Majid, who seeks work and acceptance from a community that eyes him with suspicion, disdain and aggression. 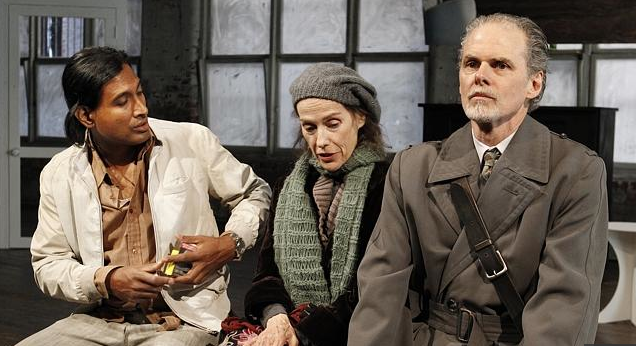 Majid (the impressive Yomal Rajasinghe) is waiting for the bus where he meets the lonely and much older Anne (Helen Morse). Through a second chance encounter their friendship deepens into a romantic relationship, much to the outrage of the town’s residents.
Daniel Keene’s story is a slow-burn but utterly absorbing tale of a world of casual bigotry and racial discrimination, where at one point, a resident ranks Majid’s “darkness” on a scale of 1 to 10. The scenes involving the various townspeople (Nicholas Bell, Jonathan Taylor, Paul English, Natasha Herbert and Marco Chiappi) whilst uncomfortable to watch and hear, are a stark reminder of the attitudes that are still held by many in Australia.

Age-discrimination, poverty and gender roles are also explored in Dreamers, but with Keene’s infusion of light-hearted or comedic moments and interludes, he never makes you feel overwhelmed by the issues but allows them to enter your thoughts and rest there.
There is some inspiring work by designer Adrienne Chisholm, lighting designer Andy Turner and sound designer Sam Bolton. All these facets blend in so smoothly with the story, and serve to deepen the impact and authenticity of the production.
The talented cast of eight are highly convincing without becoming caricatures or stereotypes. Under the masterful direction of Ariette Taylor, they create some truly affecting moments, especially as we build towards the conclusion, which allows us to leave the performance buoyed up with some hope.
Dreamers is a perfect example of strong writing, acting, and directing coming together to create a highly memorable theatrical experience for its audience. Hopefully it will not be over another decade before Keene and Taylor collaborate once more.
Venue: fortyfivedownstairs, 45 Flinders Lane, Melbourne
Season: Until 30 November | Tues- Sat 8:00pm, Sun 4pm
Tickets: $45 Full | $35 Conc
Bookings: http://www.fortyfivedownstairs.com/events/

Myron My
Reviewer/Writer based in Melbourne. Keen interest in theatre, cabaret, circus, dance and any other form of performing arts. Also a fashion, film, TV and art enthusiast.