Back at the gym today for my workout. Created myself a sexy new playlist as well and boy did it help. Turns out Paloma Faith and the like are NOT good music for working out. So lots of Kylie - yes, I went there - some David Guetta (my lady jam) and loads of other 'active' songs. So when it came to the cardio stuff, I was more focused on singing along to Rihanna than I was on reaching certain goals. Not that I ignored them but wasn't staring at the time so intently and it kind of worked for me. Didn't achieve my best but I was pleased with the results.

Managed to complete my weight circuit too. Inadvertently did 30kg for the lats pulldown and even though it was a struggle I could actually feel myself fighting past the pain and actually finishing the set. It was a very 'wow' moment because up until now whenever my PT has said 'fight through' or i've said it to myself nothing has happened, like I was having a conversation with my stubborn, annoying 15 year old self. Tonight however, it responded and even though it hurt at the time I did it.

I've been really happy with the progress I have been making - in retrospect I feel like I should have taken then advice people said and taken a before and after photo because I would like to see the difference but I guess it's enough for me that other people are seeing it. Not because I want to be noticed but because it means I am getting healthier and fitter. Co-worker today commented on how I did look good and there was a sparkle in my eyes - that was nice. 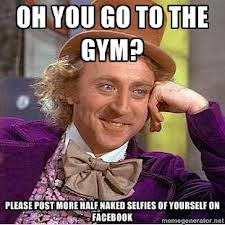 I'm glad to say I have also not taken any selfies at the gym - ugh. I hate it when people do that. Part of the reason is because I leave my phone at work and it's nice, because I don't get distracted by twitter or texts and calls and can really keep my focus on what I am doing. I like that, it's a nice escape from the real world sometimes, which may also be another reason for me to continue with this once my 30 days are up.