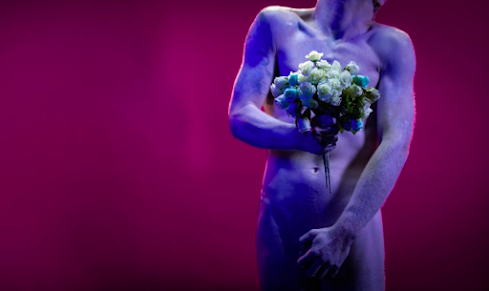 The Danger Ensemble have garnered a reputation for creating boundary pushing contemporary and experimental theatre. Since the company's relocation to Melbourne roughly five years ago, we have been fortunate to see such work as The Hamlet Aopcalypse and most recently, Day After Terrible Day. For Midsumma Festival, the company present what could possibly be their most innovative work yet, Songs of the Flesh. Based on a text by Chris Beckey, this coming-of-age fairy tale cum punk-tragedy follows a young man and his exhaustive pursuit for the name of his love. Searching through the pages of fables, history and literature, he finally finds it in The Bible and then deep within his own flesh.

"Songs of the Flesh actually started with my desire to experience solo performance back in the early 2000s. I’d been working professionally in theatre for a few years and I’d been interested in solo performance for a while," Beckey tells me. "I had heard Kate Bush's "The Song of Solomon" from her 1993 album The Red Shoes, and it is a beautiful song where Kate interpolates passages from the book of the Bible of the same name. I’d gotten a bit obsessed with the beauty of the poetry within those passages, so I gave it a read and I found that there were passages there that resonated with an  experience I’d had in Brisbane in the mid-90s. So my idea was to arrange and edit the text of "The Song of Solomon" to tell the story of my experience."

"I eventually performed it in a small season in 2000 and at that stage, it was simply titled songs. I wasn't 100% satisfied with the writing and had this feeling I’d like to redraft it," they explain. "I pretty much immediately did that, but that draft has been lost. Flash forward to 2009 and  I was about to embark on quite a large writing project but was suffering a bit of writer’s block around it, so I picked up this script again and wrote a new version. It was just supposed to be a little project to get my creative  juices flowing and I never had any intention of performing it, but I ended up showing it to a few people..."

"I was very taken with the text and when Chris did the new draft in 2009, I read both and decided I'd like to try an experiment of sorts with both the texts running simultaneously. As a kind of multiverse / sliding door queer coming of age saga," director Steven Mitchell Wright adds.

"It’s looking at the ways in which language, story and bodies interface, particularly queer bodies. The way our bodies are viewed and shaped by history and language," Beckey continues. "The protagonist is essentially a version of myself. It's actually two one-person shows (starring Josh Blake and Scott Middleton) that run at the same time and interweave and collide and hit unison together at times. So like me, the protagonist falls in love with the Song of Solomon, this beautiful, at times erotic, love poem, which is translated in the King James version of the Bible  into this incredibly rich, visceral text. I think most theologians interpret it as a poem addressed to God. But if you shift that, think of the addressee as a person, wow... it's hot stuff. Something passionate, centred in the body, beyond romanticised ideals and fairy tale versions of love."

"The Bible also contains texts that are extremely prohibitive of queer experiences," they tell me. "There is a tension between this notion of love and the violent exclusion of certain experiences of love which I have always found fascinating. And I think it’s been damaging for so many queer people raised in Christian societies around the world, psychologically and physically. When I was writing the first version of this text, the film Boys Don’t Cry had been recently released and Matthew Shepard had been murdered just two years earlier. And just when you think maybe things have  improved, something like the Orlando shooting happens. Hundreds of trans people are murdered every year and their murders remain unsolved. This could happen on our streets, in our venues. We tell ourselves it won’t, but it could. We carry this history and this possibility in our bodies. I really can’t understand how people can hate others just based on how they love, who they love, and how they carry themselves in this world. Hate to the point of wanting to permanently and irreparably harm them, and that absolutely informs the texts at the heart of Songs of the Flesh."

While the show is not immersive or interactive, as with The Danger Ensemble's previous works, the intention is that it draws the audience in so they end up feeling like they are part of this world and experiencing what is taking place, rather than simply watching. It's something that Mitchell Wright agrees with, while also stating that it ultimately depends on the work being made. "I don't want theatre to be an observational experience for an audience. I want them to be engaged, emotionally, viscerally, and intellectually. The work has to demand something from everyone. Songs of the Flesh will be a wild, queer ride, and I use the word queer very intentionally. This is not just a gay show. It's a work that is queer at the heart of its form and philosophy. I'm adamant that queer is more than a rainbow pillow bought from Kmart. It's a revolt and a revolution. It's a challenging of the status quo. It's at its heart very punk.”

"With a friendship and working relationship that spans over two decades, Beckey and Wright still find ways to inspire and challenge each other when creating new works, but as to the secret to keeping that going, neother of them are sure. "I think if I could answer that, it would kill it! I guess, at the core of our working relationship, is our relationship as people, as friends. We’ve seen each other at our best and at our worst. We’ve both been through major life events during this time. Our friendship has endured, our working relationship has endured, and is the stronger for that history. I think both of us don’t settle for the easy option, the easy answer, the easy road. We’re not scared of failure. We constantly look for the opportunity to leap into the unknown. Every time we approach the material that we think will form the kernel of a show, we not only ask how we turn it into theatre, but we continue to ask ‘what is theatre?’ What can it do? What can it be? How does it work? How can we make it work? How can we break it? What is it now? Who is our audience now? Those questions form the basis for hypotheses, the shows become experiments to test those ideas."

It is a sentiment shared by Wright. "I think our mutual respect for each other, our love for each other and our belief in a theatre that is more than literature, that is more than easily consumed ideas, that is more than a listicle or an essay is what keeps us working together and coming back for more. I would not be the artist nor the person I am without Chris or Ben Hughes (designer with the The Danger Ensemble) and I wouldn't change our working relationship for the world."