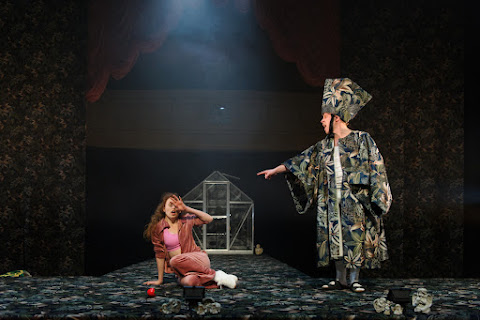 Based on English poet John Milton's epic 1667 poem "Paradise Lost", local independent theatre company The Bloomshed presents its interpretation of the temptation of Adam and Eve by fallen angel Lucifer and their expulsion from the Garden of Eden with its trademark contemporary satirical style.

This is the third iteration of Paradise Lost by the company, and each one has been unique in scale and delivery. The first in 2019 was an in-development season at The Butterfly Club, with minimal set design and a highly frenetic pace. One year later, we were blessed with a remarkable radio play adaptation and in 2022, The Bloomshed have come back to the stage in a momentous way. With the years spent working on Paradise Lost the cast and creatives have finessed the foundations of the narrative they want to share while continuously challenging themselves to take this production to the next level.

They have may been restricted in terms of stage space at The Butterfly Club, but at Northcote Town Hall, Set and Costume Designer Nathan Burmeister has surely found himself in seventh heaven. Towering drapes hang from the roof and run along the floor, with leaves and greenery printed on them that allude to the Garden of Eden and its grandness. This same fabric is also used to adourn God and give him the false impression of greatness. The rest of the cast are dressed in simple but eye-catching velvet tracksuits for Adam and Eve and satin robes for Michael and Lucifer which create an appreciable aesthetic.

The ensemble - many of whom have been involved with this production since its development - give themselves over to the chaos of the story while ensuring the characters are authentic in the world they live in. Elizabeth Brennan is a standout as Eve, finding the perfect balance of vulnerability and comedy. Her monologue towards the end is a compelling moment of theatre. James Malcher sinks his teeth into his portrayal of the absurd and ridiculous God and his bickering with The Scribe (Anna Louey) displays strong comedic timing.