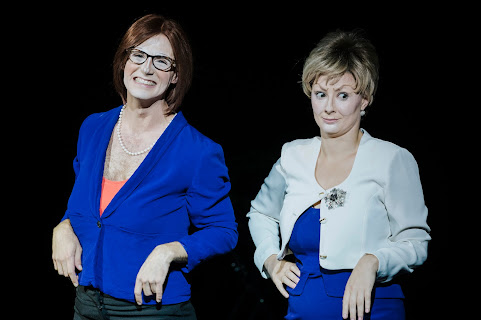 It's been almost three years since Gone Girls debuted at the Melbourne Fringe Festival. A farcical, queer retelling of two of the most powerful women in politics - Julia Gillard and Julie Bishop - and the media scrutiny they endured due to their gender. With a new actor portraying Bishop and a story with far more creative license, this new season has a fresh energy and perspective on women in politics.

Once again, the performance by Patrick Livesey as Gillard is frighteningly accurate. A little exaggerated for comedic effect but it does not fall into caricature or a send-up of Gillard. Wearing Gillard's trademark pantsuit and jacket, Livesey allows the former Prime Minister to envelop them as her speech, language, movement and facial expressions are flawlessly depicted. Similarly, Annabel Larcombe proves to be a great pairing with Livesey, finding the confidence and outspoken attitude of the former Deputy Leader of the Liberal Party.

Written by Livesey and Larcombe, the script highlights the misogyny and feminist thought that existed for these two women in everything they did and having to constantly think about how it could be deliberately misconstrued.  This is explored through fictitious bathroom encounters between Gillard and Bishop but also uses real-life Question Time footage and audio and Gillard's world famous misogyny speech from 2012 (it even has its own wiki entry).

Then we get a huge twist that dominates the second half of the show, and this is where Gone Girls falters. Without revealing what it is, it moves away from dissecting what it means to be a woman in politics to something completely different where the humanity of these two people is diminished and the empathy we've been feeling for them is disregarded. There are large moments of exposition and scenes that simply reinforce what has already played out that could be removed or reconsidered.

Gone Girls is a fun, camp and brutal takedown of the Boys Club in Government but its jump into extreme fantasy and science-fiction loses its impact and the message it's trying to get across about women in politics and to some extent, the legacy that Julie Bishop and Julia Gillard have left in the political world.