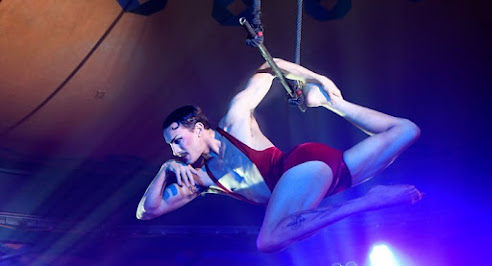 After an enforced break from the stage and a live audience, the glamorous superstars of YUMMY return for a new drag and burlesque show, ICONIC. It’s an evening with lots of colour, sparkle, and skin on display as we are presented with a range of fun and sexy acts that celebrate queerness in all its forms.

The show begins with a bang with the performers lip syncing to Madison Rose’s aptly titled song “Iconic!” They all know how to command the audience’s attention in their unique way and allow their individual personalities to shine through while ensuring that they are still working as an ensemble. Special shout out to drag artist Hollywould Star who despite being a last-minute addition to the cast, more than held their own and I wish the stars had aligned better so that we could see them have a solo.

Circus artist Jarred Dewey officially opens the proceedings with his high-heeled trapeze routine that builds on the excitement and spirit of the opening number (and his later pole dance and contortionism are also worthy of mention). From then though, ICONIC plateaus, with several acts blending into each other in their similarity of tone, energy and execution. Entertaining on their own, but when put together they lose distinctiveness and momentum.

It also doesn’t help that a fair few of the performances, including Jandruze’s sandwich making skills to Detroit Grand Pubahs’ “Sandwiches” and Valerie Hex’s magical moves to Prince’s “When Doves Cry”, have been seen before. While this can be overlooked given their absence from the stage along and with many first timers at a YUMMY show, it still made it difficult to get caught up in all the seductive play.

YUMMY will no doubt dazzle the crowds when they head to Edinburgh and London over the coming weeks. They are all accomplished performers who know how to woo a crowd. Unfortunately for long time audience goers, ICONIC may fail to live up to its name.