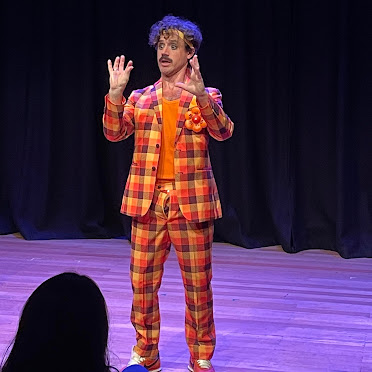 It's been five years since Dani Cabs' alter ego Poncho graced Melbourne stages and in that time, while he has definitely matured, his humour has fortunately not waned. In Poncho: Keep it Up!, our charming, orange, good-times seeker brings a mix of physical comedy, clowning and storytelling discussing ideas on who we are and what we should strive to be, that are equally entertaining and honest.

Armed with just a rack consisting of a variety of orange clothing on the stage, all eyes are on Poncho, and he wouldn't have it any other way. Poncho feeds off audience interaction and welcomes the occasional impromptu comment or laughter from the audience. Cabs is so comfortable in his Poncho skin that he is never thrown by audience suggestions or responses and remains and responds in character to whatever happens.

Cabs possesses great comedic timing and shares genuine engagement with his audience. During his storytelling/spoken word moments, even behind the facade of this Latin clown, there are interesting observations and statements made about identity and society that are even more potent given the comedic lens they are told through.

Throughout the show Poncho brings up the theme of consent and spends time working with the audience to discuss and select a safe word to be used if we feel unsafe at anytime during the show. With the very little audience on-stage interaction being completely voluntary this does not occurs at all . However, this constant reminder does not culminate to anything except being just that, a reminder that consent should always be sought. While you could argue that consent stems from the stereotypes revolving around masculinity, femininity and gender roles that Poncho alludes to, the show is missing the final piece of the puzzle to bring it all together, a moment for the audience to sit back and be amazed at or reflect on what has just unfolded.

Keep it Up! delivers plenty of laughs when seen as individual sketches, but its exploration of vulnerability and society leads to limited success. There needs to be stronger grounding and an overarching story or theme to unify everything we're seeing because otherwise we are just seeing a very cheeky boy on stage and that's all well and good, but Poncho and Cabs are capable of a lot more.