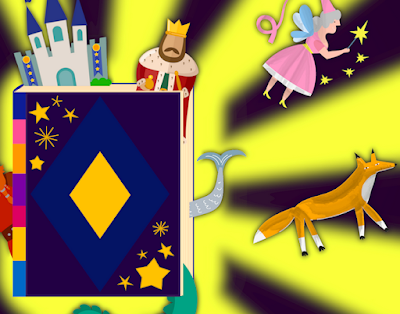 While there's plenty to see and do during Midsumma Festival for the adults, there's also just as much fun to be had by families and children, including the magical, fun, queer fairy tale show, The Story Keepers. Written and directed by Em Chandler, the show has a group of fairy tale collectors who record the fairy tales of the world with queer and trans representations in its key characters. In this upcoming production, they share three overlooked fairy tales from Germany, Spain, and Iceland.

The Story Keepers has been a long time coming for Chandler, who has spent years selecting, preparing and devising these works. "The basic premise of fairy or fairy like beings telling fairy tales has been with me since 2017. So, in various ways it’s been floating around my brain for five years. But I’ve been writing, refining, and working on it over the last three years. I had been sitting on the idea of a troupe of fairy or fairy-like beings coming together to share, perform and act out fairy tales for a long time, but had struggled to find a way to start," they tell me.

"When I discovered the Icelandic tale of "The Story of Odd", which is unabashedly trans, I knew I had to retell it on stage as it is. It is one of my favourite fairy tales and the fact that barely anyone knows of it astounds! Around the same time I came across "The Wonderful Musician" in Grimm’s Tales. Initially I found it rather lacklustre, but when I read it with a queer lens, it became a love story – and a much more interesting fairy tale. This cemented the show as one of queer and trans fairy tales – rather than just overlooked ones. This allowed me to look for a third tale to match, which led me to "The Water of Life" from Spain.

With the tales selected, the next step was determining a title for the show, which took Chandler some time to get there but once they did, it was an obvious choice. "I went through a range of different titles at various points in the show’s development, including The Droll Tellers, The Story Gnomes, and The Story Tellers, before finally settling on The Story Keepers. It just sounded right," they explain. "I adore story telling, I’m proudly an oral storyteller, but I wanted this project to have a distinct identity within the great sphere of story telling that exists."

The stories might be coming from around the world, but fortunately the first-time director didn't have to look too far to find their ensemble. "I wanted to be sure I had actors working with me who spoke the same theatre language as me – whose own work really aligned with my own theatre practice. As I graduated from the Federation University, Arts Academy in 2019, I decided to approach actors from the 2020 and 2021 graduating classes," Chandler tells me. "The Arts Academy does an extraordinary job of producing actors who are genuine, filled with curiosity, and playful, skills that are very important in children’s theatre. I’ve been thrilled with how engaged with the essence of The Story Keepers the cast are: play, wonder, and story. I can't wait for us to get into the rehearsal room properly and plunge head first into this world of imagination and wonder."

While this show might cover only three fairy tales, Chandler has high hopes for more stories to be shared in the future. "I absolutely see, and want a future for The Story Keepers. The ultimate dream is for The Story Keepers to be a kind of repertory theatre company, retelling all sorts of overlooked or little-known fairy tales," they say. "I am planning to tour the show (and these three stories) in the near future, and I’m already in the initial stages of adapting some new tales! I’ve always loved fairy tales, adore writing and performing for kids, and I am so proud to be queer and trans. To have a project that brings these all together is a dream. A little daunting, but a dream nonetheless."