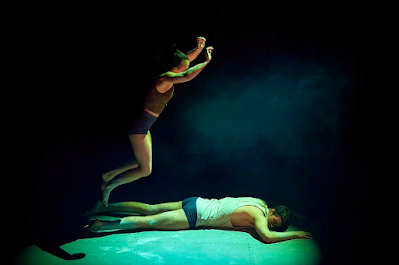 For Melbourne audiences, this will be one of the first live performances to be put on as we exit our sixth lockdown. As a circus artist, the rehearsal process and physique maintenance has not always been easy. "Covid for the arts and circus arts was bad, and is still bad. We didn’t receive the federal support we needed and so its been a tough road. But the flip side of that coin is that the arts have always had to fight for its place in society and you quickly learn to be resilient," Mann tells me. "Circus is really physical, and that time off has been a difficult aspect for the rehearsal process, so we have had to be creative and use our time effectively. Lots of awkward park workouts with the odd applause from mums and their babies. But in all seriousness, I’ve been taking this time to really think and not rush into our work. I think art has a purpose and so we’ve been making sure we know what that is."

While Common Dissonance is a contemporary circus show, it still incorporates indigenous performance, rituals, and iconography to guide its circus acts, and its this style of storytelling that Mann and Na Djinang Circus pride themselves on. "We use circus as a tool for storytelling, and sometime it’s the wrong tool. Sometimes it makes no sense to do a backflip at this very moment, so we don’t. We use the circus to compliment, and we pair similar themes inherent in circus with the ones in the story. If the concept of the act is about reconciliation and support, we create an act where we are physically supporting each other and working together. When we are looking at conflict and colonisation, we use acrobatics that are brutal and violent. The circus always progresses the story, we never write the story to match a cool circus trick," he says.

"From a cultural space, it’s so important to always work with respect, and listening to elders to guide us to tell our stories. And I think its really interesting because people tend to think that you have to do something special to add culture to your work when all you have to do is work with diverse people. If you put blak people on the stage the work will be inherently cultural regardless, the problem is the arts haven’t been making space for these voices."

Conversations between the two performers with regards to their cultural backgrounds (Mann is a Wakka Wakka man from Queensland raised in Sydney and Isabelle Champagne-Chittick is a white Australian raised in regional NSW) have played a large role since the inception of Common Dissonance and is something Mann and Champagne-Chittick continue to have discussions on with this upcoming season. "We’ve talked this show through so many times, mapped it out again and again. The show explores ways of reasoning and we both represent one of these ways, so there are big conversations about what they mean to us. And it gets complicated when our individual perspective doesn’t match the characters but that’s the point of the show," he says.

"We want people to see that there are no clear lines, and you can’t put people into boxes. A clear example of a tough conversation is the one surrounding colonisation, Isabelle obviously thinks that what happened in this country should never have happened and the continued affects are still devastating today but when portraying a character who’s reasoning is centred around a colonial mindset it's difficult to find that place and to go there as a performer. That’s why we have so many conversations to make sure everyone is safe while making this kind of work."

Mann has been working and training in circus for almost 20 years, but having founded his company only four years ago and winning the 2018 Melbourne Fringe Award for Best Emerging Circus Artist, he is keen to keep pushing himself physically and creatively for many years to come. "Circus is a very big part of my life, so it’s something that I don’t think about too much. It’s so ingrained in my identity that it comes naturally. I’ve always had a direction, I might not have a plan or any idea what I’m doing, but I know I’m moving towards a goal…. maybe when I get to it I will freak out and have a mid-life crisis but for now I'm just focused on getting this show to stage."