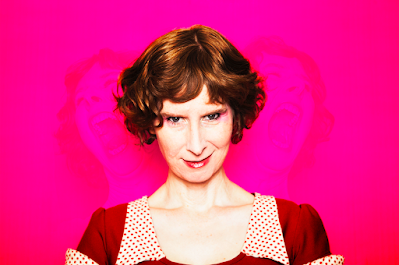 While the intention and hope was to have a live show, Nevile had a contingency plan for a digital version of Little Monster even if it required a different approach in crafting it. "Going digital meant you're not constrained by the physical space of a theatre (although lockdown has kept me in my flat) or the need to bump out in less than 15 minutes, which means you can curate each scene and dress the set with care," she says. "The writing doesn't change too much between the digital and in-person versions of this show, but I think the delivery definitely will."

"Originally it was all about lanky limbs and now, for this version, it's about intimacy. Learning how to film and edit has been a challenge, but I think this show really suits this kind of format, because it's all about what happens in your own private space. I hope to take advantage of how one-on-one and 'front-row' video can feel, so people can really sink into it and lose themselves, like your own personal bedtime story."

Ironically, while Nevile has had her fair share of unwelcome voices in her head, they were - to an extent - quite respectful when it came to her writing about them. "I've certainly got my own cast of inner demon characters monologuing at weird times of the day and night, but strangely, at least for the writing phase of this project, they stayed quite quiet and seemed to enjoy it as much as I did. Now that we've moved into the filming stage, something I'm not very familiar with, they're definitely kicking up more dust and I've had some 3am wake-ups. That said, I think they drive me to try harder and to do better, so they're not all bad all the time. It's only when one's got a megaphone that things really go downhill."

Even with the current lockdown conditions, Nevile has focused on the positives of the process. "This piece just rolled out like a joyfully stupid red carpet, and getting to concentrate on it every night after remote-working all day became something that kept me going. Letting the language and its rhythms carry me into a series of bizarre places was invigorating and it reminded me that as bad as this pandemic has felt, there's so much about life that's wondrous," she says. "The brass tacks of making it have become much, much harder, but I really love this show and it's done so much for me."

In the six years since she won best Emerging Writer at the Melbourne Fringe Festival for Poet Vs Pageant, Nevile has moved beyond extreme nerves and fear of the unknown and learnt to be more playful and open with her work and audience, something that has been clearly evident in her shows and that past audiences have felt. "The first season of Poet Vs Pageant happened at a really low ebb for me, and I was full of doubt and fear and stress. I was so stressed that year that my jaw went out of place and I couldn't shut my teeth properly, which made doing a 45-minute epic poem super fun," she recalls. "Since then I've learned to like what I create a little more and I feel like I've found solid and enjoyable footing, performance-wise. I keep my gratitude for my audience right at the forefront of my mind, and it pushes me to share everything I have in me and to enjoy myself and now I feel more professional, more robust and much braver."