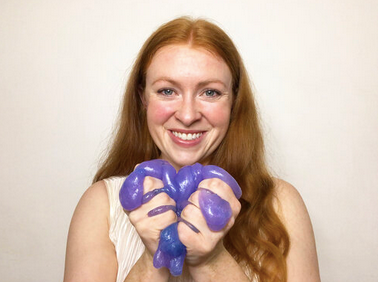 As with anything where there are people passionately interested in something, there's also people who are just as passionately not interested, however Stanley believes that they just haven't experienced the right kind of ASMR, something she's hoping her show will be able to change for these naysayers. "I would agree that people seem to either know what ASMR is and really enjoy it, kind of like a guilty pleasure that’s not often spoken about, or people haven’t experienced it and think it’s really odd. I’ve definitely encountered plenty of people that aren’t shy about their disdain or bemusement towards it, but I think that’s just because they haven’t experienced it, or they have experienced it but just haven’t put this name to it before," she tells me. "I think it garners such strong reactions because it has this sense of intimacy and voyeurism to it, which makes people think there must be something sinister or sexual to it. But it’s just pure joy and innocence!"

JSMR may delve into the world of ASMR but there is more to the show than just sending its audiences tingly sensations. In the show, Stanley will be sharing her own stories around love and self worth, building on the intimacy with her now virtual audience. "I started with the idea of wanting to do a live ASMR show because I wanted to bring something unexpected to Fringe audiences. The idea was that each audience member would watch the show while wearing wireless headphones. Most of the stage work I do is script and character based, and after not being able to perform for so long, I just wanted to create something that would be really honest while not taking myself too seriously," Stanley explains.

"Since ASMR is so widely available for free online, I wanted to incorporate personal stories to add more depth and uniqueness to the show. There are definitely scenes that reflect more straightforward ASMR and I hope might give some viewers tingles. The opening scene is a bit of a smorgasbord of ASMR triggers, both to help people settle in, or for those who aren’t so familiar with ASMR, offer them a range of sounds so they might find something they like. From there, the show gets whackier and more personal as I use different ASMR formats to share stories about what drew me to ASMR, times in my life that I felt I needed it, and personal accounts around sensory and sensitive experiences," she says.

"I’m a little nervous about how personal it gets at some points, but that’s something I appreciate in the work of other artists and I hope by talking about some of my experiences, others will feel less alone or embarrassed," Stanley explains. "We’re all a little starved for human connection right now, so here’s my intimate offering for anyone who wants it. It’s definitely been scary getting so personal, particularly in a digital format where it’s really out there on the internet, but I do keep a lot of the personal experiences intentionally ambiguous."

For Stanley, exposing and exploring her vulnerabilities to strangers, while confronting, is an experience she won't shy away from especially with most of Victoria under lockdown. "I really value truth in art and theatre, and in this curre
nt climate the mental health and wellbeing of artists feels really relevant, so even though I feel very vulnerable in this show, I wanted to say, ‘Hey, these are some things that I think and feel and sometimes get upset about, and I wonder if you do too and if you’d like to talk about it?' I’m a huge fan of getting personal. And honestly, though I’m sad not to be performing the show live, it is in some ways a big sigh of relief that I don’t have to see how audiences receive the work!"

*Please note this show should be listened to via headphones for optimal audience experience.*