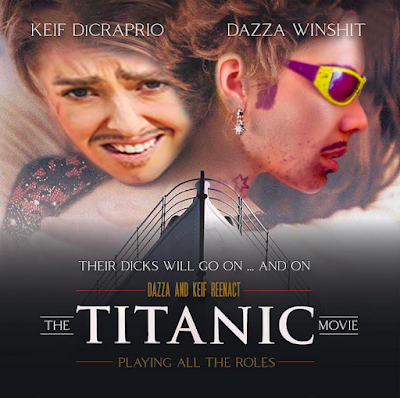 Both boys have done some very deep research into the film, having watched it a whopping 69 times in Dazza's mum garage. It's time well spent and there's been a lot of nuance they've been able to take from this. "Myz, this movie's a bloody classic! It's fucken timeless! And I was going fucken crazy in lockdown and I didn't even know which way was up if you know what I mean, and there was something about this movie that like, really got into me head, no homo. Like, we're kinda living in a disaster movie right now aren't we, mate? All the vaccines and the lifeboats and shit, I bloody can't keep track. And yes, obviously I will get me kit off and be drawn by me best mate, ya know, just a bit of boy on boy locker room shit rofl," Dazza tells me.

While there might be some romantic moments on display, Keif assures me that there is no homo going on here, but just two mates looking out for each other. "Yeah, there's no homo mate but it's not that weird cos Daz and I practise kissing and stuff all the time. Daz says it's the best way to keep our skills up over lockdown. The Tittanic is a very romantic story, and that's why people love it right, cos it's got like action and scary stuff and romance and sexy bits. So we have to do them all. I think a really epic scene is when Jack and Rose are having a party on the poor person deck and Rose discovers she has all these sik dance moves. We are gonna do some really lit dance numbers to represent different parts of the movie cos our hot chick fans love to see us dance."

There are some aspects of the film that the two have chosen to omit and also have some constructive criticism for Cameron, that only people who truly understand the film can give. "No offense to James but the movie was way too long so we made ours better by making it heaps shorter and putting in sik dances and tricks and stuff to keep it interesting," Dazza explains. "We decided to cut most of the chick roles cos they were pretty boring, so we're just playing all the bloke parts and Rose."

However one aspect of Cameron's film that the two will remain true to, is in how they bring the unsinkable ship to life for audiences. "We really wanted our version to cum to life (if you know what I mean) so we decided to make our set a living breathing thing, literally, which is where guest performer Justin Nott comes in," Keif reveals. "Building a whole ship and all that was way too hard so Justin is gonna play all the set parts like the ship and the lifeboats and the iceberg and everything. He's just doing it for free cos he owed us a favour."

To close this interview, I ask the two why they think they have struck such a chord with their fans, as long gone are the days when their only follower on Instagram was Dazza's mum. "I think we've got heaps of fans because we're not like celebrities that you can't even relate to cos they're so rich and fancy or whatever, we're just like average guys, just like the blokes next door, and people like that cos they can be our fans and our friends," Keif says.

"And obviously they're all hoping for a root LOL, it's pretty annoying actually. Stay back, ladies! Nah just jokin, keep slidin in2 our DMs lmfao," adds Dazza.