Having a yarn with Welcome to Patchwork

Just over three years ago, three friends decided to get together and talk about finding the perfect hairdresser and the right level of chat that one should have during their haircut. Since then, Christian Pisasale, Dion Factor and Josh Porter have presented their fortnightly podcast Welcome to Patchwork where they discuss life's everyday issues and concerns, like can you refuse to catch up with a new friend, should you take the elevator to the first floor and how many biscuits should you eat in one sitting? Nominated for Best Comedy at the Australian Podcast Awards for the last two years, Welcome to Patchwork has come a long way since its humble beginnings.

"It's a strange thought to have expected people we didn't know to listen to something we produced," Pisasale tells me. "One thing we were (and are) conscious of is the optic of being three heterosexual white males from Melbourne doing a podcast. For us, creating this was an outlet. We marketed it to our friends who we knew would enjoy the show and had similar, hyper granular observations about their lives. We've been fortunate to have incredibly supportive people around us who encouraged us to produce more content and who distributed our content to their friends. From that point on, our growth has been pretty organic."


"For the most part, it's been relatively slow and steady but reflecting on the volume of feedback and listener numbers we receive now, it's quite overwhelming. The people who listen to our show tend to have similar personalities to us: anxious, filled with existential dread but equally as loving and respectful. The best thing about having a podcast is being able to share silly stories and ideas with people who we know enjoy listening and becoming part of the discussion. We never had any expectations for Welcome to Patchwork but the community that is growing has been heartening."


While Pisasale has been co-hosting since the first episode, the conception of the podcast - including its name - occurred before he joined. "As the story goes, Dion, Josh and our friend Beau were starting their own podcast and were trying to find a name as absurd as its content. I think the reason Welcome to Patchwork won out is because they enjoyed saying the name with a German accent. You can still hear a nod to this origin from each intro we do. With time, we appropriated the title to fit a loose narrative of threading stories of our life into a patchwork quilt. We learned quickly that the quilting community is a strong and proud one who would prefer that we use the correct terminology when referencing knitting, quilting or threading."


With 63 episodes under their belt, Pisasale's highlight of the series comes from its early episodes, and a controversial choice at that. "My favourite segment to play was Monotoly from seasons 1 and 2. The main thrust was that we had to have the most monotonous conversations we could in a given location. In hindsight, I can completely understand why people may not have liked it, but sitting opposite Dion and Josh during those types of games are the best."

"The first few episodes we recorded were a little rough around the edges because we were still working out what Welcome to Patchwork was, but in our 4th episode there is a beautiful moment when, by complete coincidence, we started discussing watermelons and we all happened to have a unique story that we were able to roll on for 10 minutes. It was this great sign to me that we would be able to take any topic and feel completely relaxed to see where it goes." 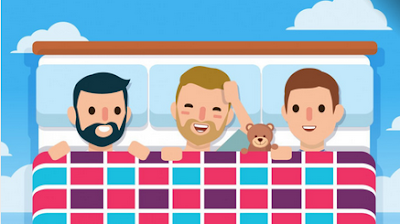 Even though they've known each for close to a decade, the podcast has at times led to some surprising admissions by their co-hosts. "The biggest revelation was when Josh announced that he washes his towels only a handful of times a year. There are so many of those behavioural quirks that, as humans, we all have that never get questioned until you allow yourself to be vulnerable enough to say them out loud and that is the space that Patchwork plays in," Pisasale explains. "The fact that we are open books to each other and, by extension, the listeners, allows us to explore the depths of some topics and it's always hilarious to hear someone attempt to defend poor hygiene."

Pisasale however is not concerned about ever running out of things to say, although the thought has crossed his mind. "Every season I have a Larry David moment of thinking, 'there couldn't possibly be another season's worth of content,' but if you take the time to listen closely to your anxieties, it's the breeding ground for decades worth of good topics. It is the greatest blessing and curse that we each see the world so differently," he says. "We can take absolutely any observation and really extrapolate on the minutiae but in the same vein, we'll squabble for an hour over what time of day to post a picture on social media. The key for us is to go into the recording with a bit of a framework that will help guide our conversations but there shouldn't be more than a few dot points on each thing we're going to talk about. For us, the enjoyable moments are those when a talking point spirals out of control.

Head to the Welcome to Patchwork website for information on how you can listen to the podcast.

If the dulcet tones of Dion, Christian and Josh are not enough for you via the podcast, visit their YouTube page on Saturday, 4 April at 4:00pm where the trio will be performing a live show.
Posted by Myron My at 21:54