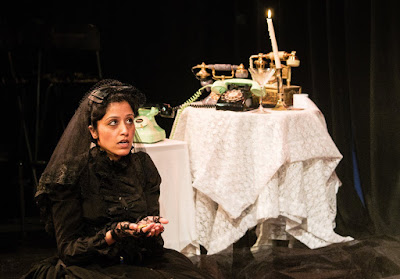 The Accountants of Death will see you now. Back for another Melbourne season after a hugely successful 2019 Melbourne Fringe Festival where they took out the award for Best Comedy, Amrita Dhaliwal and Gemma Soldati's The Living Room is an absurd yet unflinching look at life and death. The two play employees of Death who record the toll of those who have died. One has been diligently doing this for a very long time but must now show the ropes to a new starter, who is on their first day on the job while making sure those deaths get recorded.

It was the performers' individual lived experiences with death and grief that ultimately inspired them to make a work on the sensitive subject on death, often proving quite challenging for them to develop. "I lost my boyfriend in 2012 and Amrita lost her mother in 2017 so these events brought us together to reflect on the experience of loss, the rituals around grief and our questions about death," Soldati tells me. "In the early stages of this, on any given night, either or both of us would cry during the show. The emotions were raw and exposing our grief was intense. When we started, it hadn't even been a year since Amrita's mother had passed and midway through working on the show my father was diagnosed with stage four cancer."

"So the reality we're calling upon in the show is genuinely in our hearts every time we do it, no matter how much joy we also have in and around it. We've been touched by the stories audience members have shared with us. We've had several shows where they later tell us they have recently lost someone and are currently grieving. That's been a real gift for us; to connect our work, our experiences with others and their own."

"Death is so segregated in our current world so with The Living Room we sought to bring death alive into its full messiness and beauty," Dhaliwal adds. "And naturally, when we bring something out of the shadows, we can see the shared themes and real simple dynamics we all hold. So now looking back to when we met at a clown class in 2015, our work as clowns was the best avenue in which to explore something so taboo without being too precious about it."

The time spent on this show has been transformative for both on how they perceive death, which has been confronting and emotionally charged. "I know my relationship with death has deepened in the last year intentionally and unintentionally," Soldati says. "It has been scary that we're working with a topic that's expected to be kept private or quiet, but doing this with Amrita has allowed me to feel solid in the provocation. The response we've received has been the true gift, not in terms of accolades, but with the stories we've heard from audience members. It has truly been so humbling and connective.”

It's a sentiment that is held by Dhaliwal who continues to view death as a constant lesson in which to grow from. "Depending on the hour you ask this question my answer is always changing! Death, though incredibly painful, is a profound teacher and she continues to teach me daily. The main thing I've learned is how much collective loss is hidden in our communities and no one talks about it. So many people would come up to us afterwards to share their own stories and it was so surreal," she recalls.

"It reminded me of a tradition once held in America where during times of mourning, one would wear a black armband. I wish for the return of this. It's a gentle reminder to be softer and to move slower with the person in mourning, a reminder to yourself that there is so much for which to be grateful, and the reality that death is a part of life."

1) When did you realise you were funny?

Gemma: I knew Amrita was funny the first day of our clown class when I saw her embodying diarrhea on the floor for a bit. She was incredible. Free, absurd, and so grotesque. It was wild.
Amrita: I knew Gemma was funny when she walked into Deanna's class and as she introduced herself she started giggling uncontrollably. I had two simultaneous thoughts: she's hilarious and she's not well.
2) What is your favourite word?
Gemma: Scrupulous - because it sounds gross but someone who is scrupulous would never be gross.
Amrita: Raj karega khalsa - Ok... so this isn't a word, but it's my favorite sound! It is a line from ardaas (from Sikhism). As a little girl, this was my favorite moment at the Gurdwara (apart from langar, aka free free free delicious Punjabi food). Everyone sang it so loudly and clearly. It means the Khalsa shall prevail/rule.
3) If you were arrested with no explanation, what would your friends assume you had done?
Both: Protesting.
4) If animals could talk, which would be the rudest?
Amrita: Meerkat for sure.
5) Which character from a TV show most reminds you of yourself?
Amrita: Julia Louis-Dreyfus in VEEP, and Gemma is an original, there's no one like her on TV or anywhere else in the world.