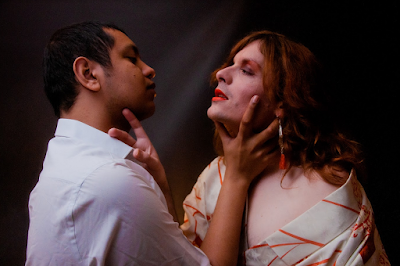 Darwent & Gray are known for creating musical comedies exploring sex, sexuality and gender. Their previous outing, The Rest Is Drag, looked at the labels we place on ourselves and the complexity of building relationships based on those labels. For the 2020 Midsumma Festival, the company is yet again tackling labels and relationships but in a theatrical drama without their trademark music and songs.

Love By The Hour investigates the boundaries of friendship when one discovers his friend is a sex worker and decides to book them for an evening. Writer Caleb Darwent drew from a number of events and moments in their life that subsequently released a Pandora's box of ideas to navigate through. "The central concept sprung from a conversation with a friend of mine who had recently been offered money for sex by a Grindr Daddy. They were contemplating accepting his offer and start to do sex work. My first thought was how awkward and inappropriate it would be if I were to hire them, considering our pre-existing non-sexual friendship. The more I considered this, the more ethically complicated I realised it was," they tell me.

"It would be necessary for a sex worker to separate their emotions from the sex that they want and the sex that they’re paid for. In theory, friendship shouldn’t preclude this kind of transaction, especially when contemporary sexual ethics and the queering of personal relationships generally places sex between friends as normal and unproblematic. But I think a multitude of queer people underestimate the emotional impact that physical intimacy can have on a relationship, and that a sex worker, no matter how experienced they are, would likely struggle to compartmentalise their work from a close, long-term friendship."

Darwent credits writers Colette, Noël Coward and Oscar Wilde as further inspiring this show in relation to its characters, plot and how issues around sex are presented. "I had the concept of a modern-day courtesan after reading Colette’s Cheri. Her novel is about the relationship a mature courtesan has with a rakish young lover. Similar to Love By The Hour, they believe they are simply having a casual, sexual affair, but realise too late that there are far too many feelings creeping in," Darwent explains. "I find the figure of the historical courtesan fascinating for their ability to use their beauty, sophistication and cleverness to gain influence in society and to wield authority and position when women were basically an underclass. They are emblematic of strength and resilience in the face of adversity while maintaining their style and wit, which is relatable for a lot of queer people."

"On the other hand, Oscar Wilde and Noël Coward remain a constant source of ingenuity for me, as they used witty and amusing dialogue to look at serious themes. Coward in particular often pushed the envelope in terms of his depiction of sexual ethics and gender, presenting progressive ideas to mainstream audiences. Sexually-empowered women, heavily queer-coded men and even a bisexual throuple appeared in plays that Coward wrote in the 1930s but they were so entertaining that he was able to get away with it," they say. "Wilde and Coward inspired my approach of mixing comedy and drama to create plays that are fun and accessible for everyone, while depicting diverse and intersectional queer relationships to challenge audiences to reconsider their understanding of sexuality, gender, and relationships."

Darwent expresses some trepidation with moving from musical comedy into dramatic work but relishes the opportunity to showcase another facet of Darwent & Gray and their unique storytelling. "It was a big change to move from musical theatre to writing a play. In musicals you use dialogue to build up tension, but you explore the key emotional beats through song, whereas here I had to do it entirely through dialogue," they tell me. "That was one of the reasons why it took me longer to write this show than any of the others. I needed to satisfactorily present the complex emotional journeys of the characters and the ethical questions I wanted to dissect." 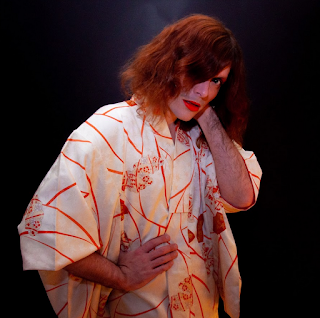 If writing a new piece outside of your comfort zone is not daunting enough, Darwent will also be performing in this production as Eve, the sex worker who gets propositioned for sex. "I’ve always been interested in acting but outside of a few small roles at film school I’ve never really pursued it, so I wrote them with myself in mind. Eve's development comes partially from my life but I’m nowhere near as vain or lacking in self-awareness… at least I hope not. They have been floating about in my head for roughly ten years, so I’m super excited to be the person finally bringing them to life."

Rehearsals may have just begun with an intense December/January schedule but the cast and crew are already aware of the intimate and sensitive nature of this work. "Even doing the photo shoot with my co-star Tushar Bist was quite affecting. We were trying to convey the idea of the two of them jockeying for power, which is an underlying theme of Love By The Hour and afterwards we had to hug out all the tension that we’d worked up," Darwent recalls.

"There are plenty of discussions on family and break ups, a great deal of which is motivated by my own circumstances, so of course it brings up a lot of emotions hearing again the things that were once said to you, but I look forward to channelling those feelings into the show. I should thank my ex though as he has inspired much of my work. Artistically, a broken heart is the gift that keeps on giving."


1. The one food you can’t live without? Hummus. It’s a whole food group in my pyramid.
2. What is the worst smell in the world? Rotting cat flesh. It gets in your nose like a physical presence. Don’t ask how I know.
3. What is the strangest fact you know? Marcel Proust used to jerk off while watching starving caged rats kill each other. This is one kink I will gladly shame.
4. How long would you last in a zombie apocalypse? Oh, all the way to the post-post-apocalyptic world where I would rule as queen of a society composed entirely of queer people and cis-het women.
5. Which animal are you most like? The peacock! Beautiful, glamorous, and dangerous.

Image Credit: Teddy Darling
Posted by Myron My at 21:17