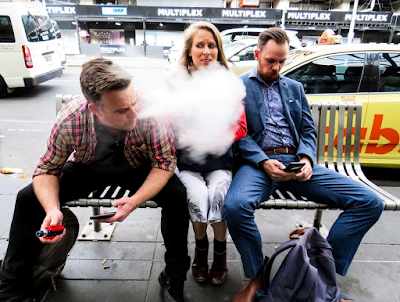 How often do we complain about someone and describe them as the worst person ever? They might be rude, aggressive or obnoxious towards us, ignorant of the world around them or perhaps we simply don’t like the way they breathe. Written by Canadian duo Megan Phillips and Peter Cavell and presented by Melbourne theatre company, Salty Theatre, People Suck is a musical comedy that highlights these terrible human behaviours, and if you think this is only about them, then you’re in for quite an awakening as you begin to identify with the various examples.

The quintet (Belinda Jenkin, Tim Lancaster, Georgie Potter, Ashley Taylor and Ashley Weidner) go through a range of scenarios where people can excel at sucking. The workplace brings out a number of relatable gems, namely not liking a colleague for no particular reason and having your lunch eaten by the resident office thief. We delve into #MeToo territory with a sexist and lecherous boss but what People Suck does well in is taking something serious and giving us permission to laugh. The absurdity of religion and the reasoning as to why one God is better than the other is hilariously juvenile in "My God" and the joys of being surrounded by frenemies is brilliantly executed by Jenkin, Taylor and Potter in "When I See You Smile (I Want To Kill You)".

The humour doesn’t always hit the mark though and there are times when dialogue is awkward and unnatural, such as the interaction revolving around the girl guide cookies. The "Who Sucks Worse?" song/game has potential to get the audience involved but its comparisons between two choices - including Hannibal Lecter and Chairman Mao - makes it fairly obvious who sucks worse. If this had included more local and/or similar options and didn’t feel so rushed, it would have allowed us to be more active participants. The mention of Israel Folau brought laughter and nods of agreement, so the enthusiasm was there, waiting to be released.

Jenkin’s brings remarkable physicality and hilarious facial expressions to her characters. Her comedy skills particularly shine while singing about her disappointment in a partner who is unable to satisfy her orally. Weidner and Taylor have strong solo ballads, but at the same time they feel out of place in this production. Considering there is no narrative, there is no character realisation nor is anything at stake with these songs. Removing these songs, would allow for a much punchier and tighter show and keep the audience energy high.

People Suck may highlight the worst in people, but it also showcases some admirable qualities in Salty Theatre and its performers. With energetic performances, accomplished vocals and plenty of laughs this is a entertaining way to spend poking fun at all the annoying people in our lives and maybe, just maybe, learning a lesson or two about ourselves along the way.

Photo credit: Sarahlouise Younger and Ashley Taylor
Posted by Myron My at 14:35