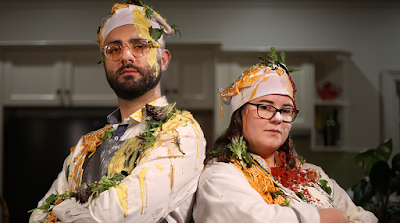 Australia has always had a love for cooking shows including, Ready Steady Cook, The Great Australian Bake Off, Masterchef and Jamie's Kitchen. The latter, hosted by chef Jamie Oliver, eventually led to Oliver's 30 Minute Meals, where a healthy, instagram worthy meal could be prepared in 30 minutes. As part of the 2019 Melbourne Fringe Festival, theatre company Stage Mom (Alberto Di Troia and Hannah Fallowfield) have taken this idea and brought it to the stage with their show, I Still Haven’t Found What I’m Cooking For.

A live art culinary event held in an inner north Melbourne home, the evening consists of a Fringe Festival artist cooking one of Oliver's 30 Minute Meals live in front of an audience. "It's interesting how easily cooking translates into a performance setting. Cooking is already highly performative and we're simply pointing it out!" Di Troia and Fallowfield tell me. "The show is an intimate and site-specific experience for audiences, with some very tasty treats and surprising participatory elements that we promise aren't at all scary! We have a number of extraordinary Fringe Artists being taken out of their comfort zone and will hopefully have everyone seeing Jamie Oliver in a completely different light."

In his heyday, Oliver was seen as a beacon of healthy eating and food appreciation by middle class families, but Stage Mom present a cutting critique of the British chef. "All our friends and family were obsessed by the concept of his 30 Minute Meals. Cooking and food are so important to both of our lives and how we relate to our family and friends, so the idea that you could reduce that process to a 30 minute speed-endurance test was bizarre to us," they say. "The more we researched Jamie the more we realised that he represented the worst of convenience culture and consumerism. Jamie may mean well with his healthy lunches and obesity campaigns, but he's just offering us another way to fit more into the work-frenzied, time-poor, capitalistic lives that already make us miserable."

For now, the team are keeping mum about who is gracing the kitchen each night but they do assure me that audiences will be impressed by the selection. "We're in the process of finalising all of our cooks and while it's still under wraps, pay attention to our social media for announcements over the next couple of weeks. We can say though, that all our contestants are at the forefront of the Melbourne independent performance scene."

There may be no roses to be handed out or immunity idols to be played with I Still Haven’t Found What I’m Cooking For, but as this is still a culinary "competition", the same meal will be cooked each night to see how the various artists compare to each other. "The meal itself is still a secret, but we can say that it will be vegetarian, mainly for food safety purposes; we don't want anybody getting salmonella!"

With so many cooking shows on TV, the Stage Mom duo believe our fascination lies from the need to project an image of perfection and excelling in every aspect of life. "Food and cooking is such an intrinsic part of human existence and we all have a personal relationship to it," they tell me. "Cooking shows take a basic human need and turn it into something aspirational and exciting. They allow us to imagine that if we can cook the perfect 12 hour glazed pork belly, we can be heroes to our family and friends and an adoring public. Also, celebrity chefs often do a great job of appearing to be our friends, using social media to interact with us intimately in the privacy of our kitchens. They create the illusion of connecting with us through the power of food, but does Jamie really want to be your friend?" There's some food for thought.

1. If you had to name your child after a vegetable what would it be?
ADT: Fennel, because it's cute and delicious.
HF: Capsicum.

2. Which reality TV show would you most like to appear/compete on?
ADT: Lindsay Lohan's Beach House. I know how to throw a party in Mykonos, bitch.
HF: Keeping up with the Kardashians. I want be who Kanye cheats on Kim with.

3. A movie that sums up my life is
ADT: Titanic.
HF: Gladiator.
A double bill of these films sums up our relationship pretty well.

Venue: A Home in the Inner-North (revealed upon booking)

Image Credit: Peter Frith
Posted by Myron My at 23:52